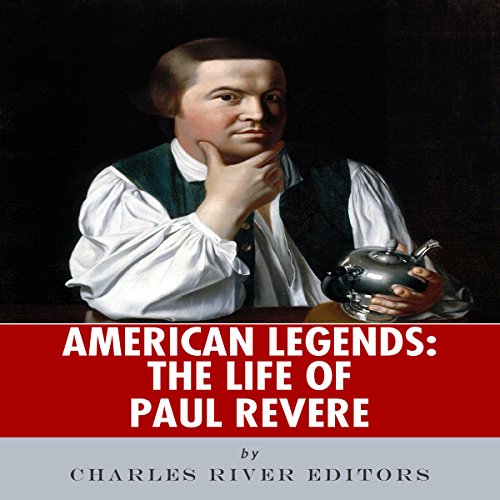 By: Charles River Editors
Narrated by: Chris Brinkley
Free with a 30-day trial

"Out started six officers, seized my bridle, put their pistols to my breast, ordered me to dismount, which I did. One of them, who appeared to have the command there, and much of a gentleman, asked me where I came from; I told him. He asked what time I left. I told him, he seemed surprised, said 'Sir, may I crave your name?' I answered 'My name is Revere.'" (Paul Revere)

Over the course of 83 years, Paul Revere was one of the most prominent citizens in Boston, heralded for his silversmith work, his participation in the Sons of Liberty, and his service in the Massachusetts militia. Fathering 16 children by two wives, 11 of whom survived to adulthood, Revere supported his large family by doing everything from dentistry to casting church bells and engraving the most popular image of the Boston Massacre. His ability to roll copper into sheets made his work even more valuable to the dry docks and naval construction in Charlestown and around Boston.

Given everything he did for Boston and his community, it would have no doubt greatly surprised Revere if he had known he would become an American legend for his midnight ride on the night of April 18, 1775.

What listeners say about American Legends: The Life of Paul Revere