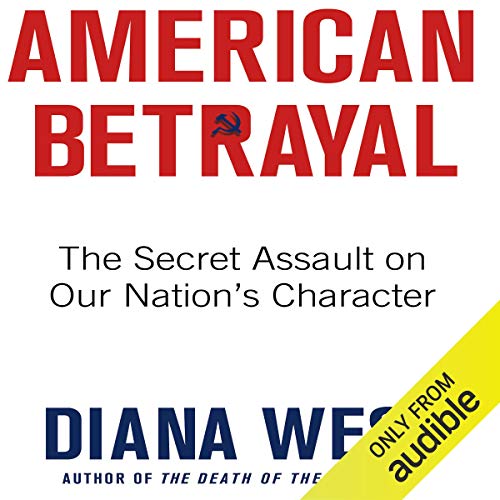 American Betrayal: The Secret Assault on Our Nation’s Character

"Russian influence" may have entered our national pop-consciousness in Election 2016, but it is the shiny, deceptive, contested, and buried X-factor of a century of wars in Washington. In American Betrayal, Diana West digs deep to uncover a body of lies that Americans have been led to regard as the near-sacred history of World War II and its Cold War aftermath.

Part real-life thriller, part national tragedy, American Betrayal lights up the massive, Moscow-directed penetration of America's most hallowed halls of power, revealing not just the familiar struggle between Communism and the Free World, but the hidden and unceasing war between those wishing to conceal the truth and those trying to expose the official web of lies.

American Betrayal is America's lost history, a chronicle that pits Franklin Delano Roosevelt, Harry Truman, Dwight David Eisenhower, and other American icons who shielded overlapping Kremlin-directed conspiracies against the investigators, politicians, defectors, and others (including Senator Joseph McCarthy) who tried to tell the American people the truth.

American Betrayal shatters the approved, "court histories" of an era that begins with FDR's first inauguration and ends when we "win" the Cold War. It is here, amid the rubble, where Diana West focuses on the World War II - Cold War deal with the devil in which America surrendered her principles in exchange for a series of Big Lies whose preservation is the basis of the tryanny of the "Swamp" today. It was this moral surrender to deception and self-deception, West argues, that sent us down the long road to moral relativism and "political correctness". In American Betrayal, Diana West shakes the historical record to bring down a new understanding not only of our past, but our present.

What listeners say about American Betrayal: The Secret Assault on Our Nation’s Character

True history of WWII &its consequences then & now

Would you consider the audio edition of American Betrayal: The Secret Assault on Our Nation’s Character to be better than the print version?

Its careful, thoughtful, detailed revealing of the suppressed historical record on WW II, Franklin D. Roosevelt, Harry Hopkins, Alger Hiss, Lend-Lease and how all these factors combined to a US policy devoted to appeasing Stalin, which has the effect of trading a National Socialist dictator for an International Communist one. The story shows how the consequences of those actions are glaringly evident in today's appeasement policies toward's Islamic Jihadist and our increasingly PC/Marxist culture.

West's narration is superb. Her pleasant, relaxed overall style of reading makes her occasional sarcastic inflections in some passages stand out as dramatically powerful to accent a particular point. Additionally, West uses an array of character choices to not only better highlight quotes, but to add entertainment value to an already fascinating, yet startling narrative.

Hard to pick just one. There were several. Of particular note was the revelation of how US troops were needlessly abandoned in the Pacific Theater of the war in order to execute Stalin's future plans of conquering Eastern Europe; George Racey Jordon's brave heroics; The Katyn Forest Massacre; the revelation that US planes were flying overhead and could have prevented some of the horrors of Auschwitz, how the war could have ended by 1943; but most startling of all was the revelation of how our US president allowed Stalin to keep up to 20,000 or so US POWs in brutal conditions with barely a fight, and has yet to own up to it.

I hope West narrates her other books and makes them available on Audible, soon.

The Most Important Book of the Century!

Diana marshals a gargantuan amount of evidence not just from recently released VENONA cables and the Mitrokhin Archives that prove McCarthy was right and underestimated the scale of communist penetration of all our institutions so the left can shut up, but Diana also brings together the corroborating evidence from hundreds of witnesses and scholars to arrive at an even more shocking big picture than the partially released Venona cables. As she put it “Above a certain level of infiltration by the other side, a group, a body, or an institution is no longer viably ‘ours’; it’s ‘theirs.’ I believe the infiltration of the United States soared past that danger level to the point of de facto occupation, where national interest was no longer paramount but Soviet interests were.” If you want to understand the rolling coup d’etat by the deep communist-left state and the intelligence agencies against President Trump, read this book! It is perfectly narrated by the author. I cannot say enough good about her likely decade or more of research when I am typing this out on my iPhone in my car, being asked by Audible to review the book now.

expose of the biggest psyop ever

Diana West lifts the veil on one of the biggest and most successful psychologic operations against the United States that was started by the Soviets and continues to this very day without the Soviet existing anymore. The extent of the infiltration into every facet of culture society and gov't is astounding. That is was well underway well before WWII I had no idea about. What we've been told about the poor innocent victims of the red-scare is a monstrous lie of incredible proportions. Where the Societ's lacked technological warfare capabilities they more than made up for in mind-warfare capability. So potent was this program that once launched took on a life of its own continued long after the fall of the Soviet Union. This story meshes perfectly with the explanation of ex-Soviet KGB officer Andre Besmenov who explained in the early 80's the Soviet's techniques of taken down countries. This book applies perfectly to the present day. Very engrossing and informing. You want a big picture then this is it.

To understand why they lie in your face

Every American should read this book, which gives the history of US-Soviet relations between 1933 and the end of the Soviet Union. Whether or not you agree with the author is irrelevant; you should hear what she has to say and decide for yourself what the truth is. Arm yourself with this knowledge and you can look at the history of the bloody, genocidal 20th century objectively. And once you have heard the audio version, get your hands on a hard-copy version of the book and read it, studying the footnotes and bibliography. You will come away a much richer person.

A Powerful Rebuttal to a Century of Marxist Propaganda

Many of us have a sense that the history taught in school is inaccurate. The problem is history is so comprehensive we don’t know where to start. Americans Betrayal Doesn’t just discuss the false narrative’s propagandized by societies most powerful institutions, it systematically discredits such propaganda point by point via a forensic examination of primary documents.

What a book! As someone who grew up during the last years of cold war, this book is pretty challenging to almost all of my knowledge about world war 2, cold war and post 1989 era in my country. There is a lot of answers to questions, I was asking for the last 30 years. This book definitely proves the necessity for history revision. Highly recommended!

I had to listen to this marvelously documented treatise several times to grasp all the nuances and turns in our American history since 1935 that Ms. West presents.
I am totally impressed with the research that has gone into this book. She quotes from memo's, newspapers, memoirs and many other sources. I bought a copy of the book so I could glean further from her bibliography.
This answers questions I had even as a child, "Why was all that land given to the USSR after WWII?" Diana's explaination, although frightening, seems plausible to me.

For me reading this book has been life changing

the “every American should read this book” cliche is overwrought but, in this case, true. The facts presented are overwhelming, as they would have to be, given utterly foreign and unfamiliar landscape that Diana West reveals. With a clarity and wry sense of humor she paints a world that rings as true as the world of my previous understanding somehow rang false, though I knew not why. If you are of a mind to look deeper into the nature of the modern world and can steel yourself for the journey to the truth (and against the universal lie that surrounds and has surrounded us for the last 8 decades), then this is your book.

My distrust of my own government began with the Iraq war when we were assured by our "intelligence" community that Hussein harbored WMD. After toppling the terrorist government, we waited anxiously week after week, month after month, as we were told our military were searching every inch of desert. In the end, no WMD. We were lied to. Or worse, our "intelligence" community is the laughing stock of the world.

This book explains what's really going on and things like how the director of CIA Brennan could have voted for a communist candidate in the 70s.

It took most of 455 pages to get me to realize we actually did lose WWII, but at least now I feel like I have broken free from the illusion. We need a reality revolution.