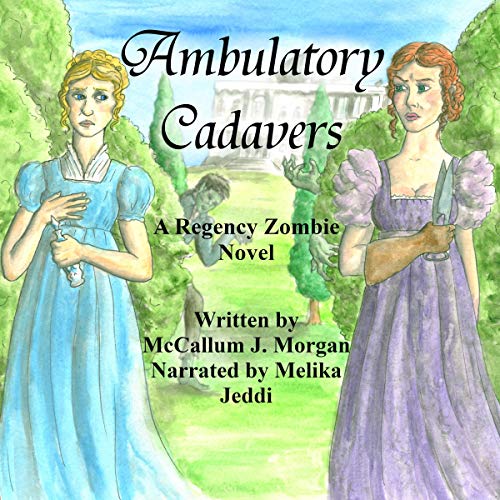 By: McCallum J. Morgan
Narrated by: Melika Jeddi
Try for $0.00

Lyra will stop at nothing to achieve her father’s dream of dissolving parliament into anatomical sludge and to search out the farthest reaches of science and the arcane arts. That is, until her own dreams begin to awaken, jolted by the electric sparkle of an artist’s eyes.

Lacking a strong constitution, Alice can only run from her problems, until she collides into the company of a strange young man of questionable occupation and discovers her cousin’s terrible plans.The dead are about to rise, the lords are about to fall, and things are about to get creamy.

High society will never be the same again.

What listeners say about Ambulatory Cadavers

A unique and engaging lessons

The concept of this book leaves one wondering what the story will entail. 19th century zombies? That alone made it intriguing enough to give a listen!

It took a few moments to adapt to the narrator’s accent, but it was perfectly fitting and really helped to set the mood of the overall story.

The author did a great job of setting the historical landscape of the story and blending in both the culture and manners of the time with the occult element of zombies. He wrote in such a way that the story is both intelligent and humorous.

It’s definitely worth a listen. Give it a try and experience the magic that is Ambulatory Cadavers!