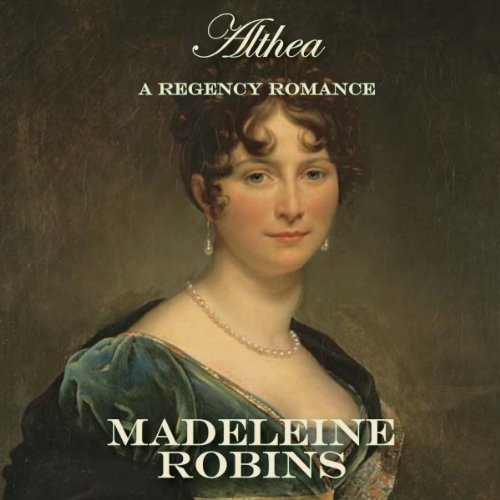 By: Madeleine Robins
Narrated by: Lauren Irwin
Try for $0.00

In her father’s household Althea Ervine was used to having the running of things - until her father disowned her (again) and Althea fled to her sister’s home in London. For the first time in her life Althea gave herself up to the gaiety of a purely social life, to the theatre and parties and the admiration of young men.

The most ardent of these young men was Edward Pendarly, and Althea thought she could like him very much. But the infuriating, fascinating Sir Tracy Calendar hinted that Edward’s intentions were not all they should be. But why did Sir Tracy care, and for that matter, what were Sir Tracy’s intentions?

What listeners say about Althea

Oh dear, I hear there has been ample time for corrections and edits, but still this appallingly un-read reader has not been rescued from her foibles and mishaps, as the heroine of the story was. For example, cushion does not in any accent rhyme with Russian, nor do push and bush rhyme with lush.
The Audible production could have redeemed this book and made it merely innocuous, rather than painfully hard to hear.

Great story. So so narration...

This is the second time I have listened to this narrator. She has a pleasant voice that is very nice to listen to. However, she needs to work on her pronunciation. She either buzzes over words she doesn’t know how to pronounce, other words she confidently pronounces VERY incorrect. It’s very distracting! I’m also embarrassed for her, if this is your profession, learn pronunciation.

The story is a great romance, no sexual content, which I appreciate. Will look forward to reading more from this author.

The story is a good light read, but the narrator pronounces so many words wrong that it is completely distracting. I would read this one if possible.

The reader is somewhat arch and convinced of her talent. She needs to understand the languages she's speaking -- Ma'am rhymes with ham; and it took two hearings to understand the word "ennui". The reading puts me in mind (I don't know why) of the March girls performing one of Jo's more dramatic offerings. The story is delightful -- the reader doesn't need to hit us with its wit.

Fun story. Great characters. Takes patience due to narrator. She sounds very young, accent is inconsistent, mispronounciation of words throughout.

So. Many. Mispronounced. Words.

Sweet story, a bit thick and slow but sweet and fun as well. The biggest issue is with the narration. I get it, there's plenty of words to work with here and I can't imagine reading it all aloud....but... we're not talking 2 or 3 errors. Otherwise the narration is just lukewarm. Not engaging but not dreadful.

The story was charming, the reader's voice was charming, but she mispronounced words so frequently that I was constantly wrenched out of the story. She also mis-stressed words and pronounced the main character's name 2-3 different ways. Poorly produced and no quality control. How was this person selected as a professional reader?? I would love to hear story properly performed.

Decent performance but the narrator has NO idea how to pronounce certain words and she clearly has never bothered to look them up. So irritating that production didn’t bother to hire a competent narrator.

Not sure what accent the narrator was supposed to have - it certainly was not English (as in from England). Quite irritating

I love this author. But could not get through the book because of the narration. Her voices were the same for every character and it was difficult to follow.