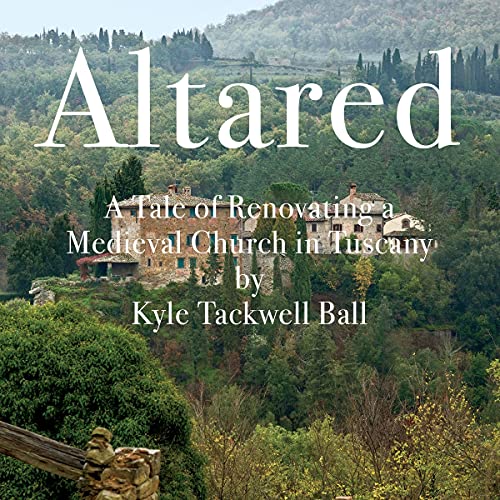 By: Kyle Tackwell Ball
Narrated by: Pamela Almand
Try for $0.00

An invasion of mysterious bugs, the discovery of hundreds of skeletons in the backyard and occasional visitations from a ghost who smoked Marlboro Lights weren't what I had in mind when I dreamed of owning a home in Tuscany. My search for a quaint country house in move-in condition near Florence instead led to the purchase of an abandoned church we fondly referred to as "The Italian Money Pit", and the project took several years to complete.

The New York Times notable author, Dario Castagno, describes Altared:  A Tale of Renovating a Medieval Church in Tuscany as "a heartfelt chronicle of an unforeseen connection to a crumbling church and apartment. It's a tongue-in-cheek collection of some of the zaniest local characters - their tics, attitudes, ways, and weaknesses." The church's before and after story entitled "A Classical Epiphany" appeared in an eight-page spread in the March 2010 issue of Architectural Digest. This light-hearted memoir will transport you to Tuscany and proves the challenges were worth the end results. "Difficult roads often lead to beautiful destinations."

What listeners say about Altared

Brought many wonderful memories to my mind

Having visited Italy several times over the last 20 years and having had wonderful experiences each time, the story took me back to that wonderful place in my mind. I enjoyed listening to Pamela Almand tell the story with her peaceful voice but wish the book was also available in print as I would like to have a copy of it. I'm one of those crazy people who still likes to turn the pages.

Warn and humorous and simply delightful!

This memoir is probably the down to earth, real story of an "Under the Tuscan Sun" experience! No rose colored glasses here, but instead it is a funny, warm, and real saga of what everybody's always dreams of... and how it is never as starry eyed as it seems. The Italian accents just made it even more fun and the reader did an awesome job of giving personality to each and a warmth that sounds like it made all the hassles worthwhile. I think I was as sad as the author when she eventually sold the church. Even with all the roadblocks and games it made me want to do the same thing! Super author, super writing, and super narrator made a super audiobook.