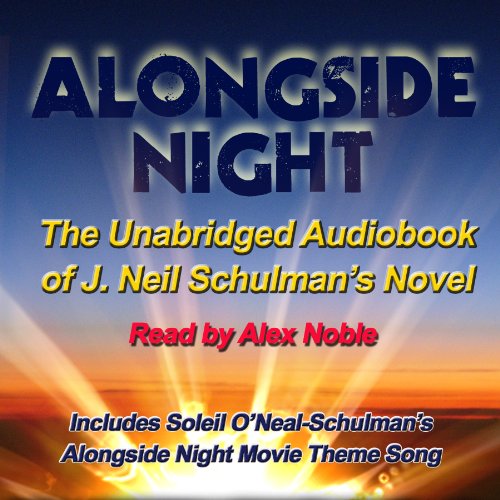 Alongside Night - The Movie Edition

It's the near future and America is in trouble. Hyperinflation and disorder reign in the towns and cities of the nation.

Alongside Night tells the story of Elliot Vreeland, son of Nobel Prize-winning economist Dr. Martin Vreeland. When his family goes missing and while being shadowed by federal agents, Elliot, with the help of his mysterious companion Lorimer, explore the underground world of the Revolutionary Agorist Cadre to rescue them. It's a story of romance, intrigue, action, adventure, and exhilarating science fiction thrills.

What listeners say about Alongside Night - The Movie Edition

Recommended to me by a member of an Anarcho-capitalist FB group. Entertaining and suspenseful yarn on the financial collapse of the US and the exploits of its teenage hero Elliot who must find his family. Short, with plenty of attention to detail, but pace never drags. Excellent narrator, changes his voice perfectly for each character.

For those who enjoy considering alternate realities and disuptopian thrillers here is a book for you. The characters are fun, the ideas intriguing, and the concepts are scarily a real possibility. Though written in the 70s, this novel is still relevant.

Great vision of a libertarian revolution.

An interesting take on how agorism could work. The parallels to the current US economic situation and "deep state" are a little chilling. All wrapped in a Heinlein style adventure with a very mature teenage boy as the main protagonist.

fun enough for someone who knows.

given when it was written, the liberty based soliloquies are a little out of place to be a good story. For its time it was probably a bit more eye-opening. Today it just seems a little forced.

Ahead of it's time, belongs in the roadmap section

Every Agorist needs to read this book. Fascinating storyline describing how difficult (and possible) counter-economics was before crypto Anarchy made a counter-economic victory inevitable. Anyone who likes peaceful, nonviolent resistance against the State should enjoy.

it's no "the moon is a harsh mistress"

The story is passable for a dime-store novel, but the author keeps beating the reader over the head with their politics. Even as an ancap myself I couldn't help but roll my eyes when some point of economics or agorist theory was awkwardly shoehorned into the dialogue (which was often). Apart from that, in the audible version, many of the characters were performed with rather poorly executed accents. I'm a bit sad to say, this is a 'not recommended'.

this is less of a real book and more of a write-up of a fun near-future setting dnd campaign, full of inside jokes and shameless references.

This is an outline partially flushed out, rather than a completed work. Several interesting concepts, but poorly described.

And the narration is truly atrocious.

What did you love best about Alongside Night - The Movie Edition?

The book is very intriguing and is the anti-Red Revolution.

What was one of the most memorable moments of Alongside Night - The Movie Edition?

I loved the scene where the characters are at a drug store and are able to buy all illicit drugs off of the shelves with no regulation and simple disclaimers. Fantastic!

What does Alex Noble bring to the story that you wouldn’t experience if you just read the book?

A decent rendition, but I found, at times a bit rushed.

It appeared the narrator was a tad rushed at times, but overall I would highly recommend this book.

Alongside Night is occasionally entertaining and even sometimes thought-provoking, but suffers from dry characterization and a clumsy plot. Definitely read as a curiosity if you enjoy libertarian fiction or sci-fi.