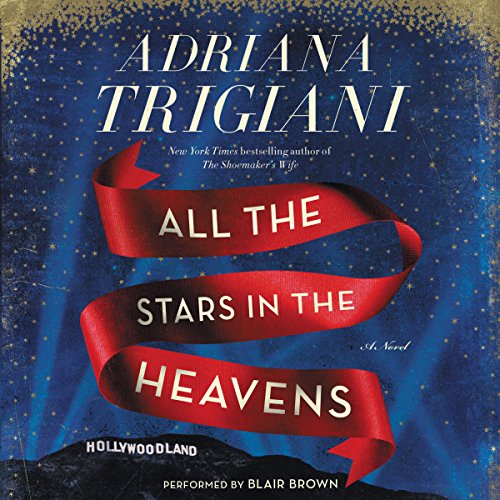 All the Stars in the Heavens

By: Adriana Trigiani
Narrated by: Blair Brown
Try for $0.00

Adriana Trigiani, the New York Times best-selling author of the blockbuster epic The Shoemaker's Wife, returns with her biggest and boldest novel yet, a hypnotic tale based on a true story and filled with her signature elements: family ties, artistry, romance, and adventure. Born in the golden age of Hollywood, All the Stars in Heaven captures the luster, drama, power, and secrets that could only thrive in the studio system - viewed through the lives of an unforgettable cast of players creating magic on the screen and behind the scenes.

In this spectacular saga as radiant, thrilling, and beguiling as Hollywood itself, Adriana Trigiani takes us back to Tinsel Town's golden age - an era as brutal as it was resplendent - and into the complex and glamorous world of a young actress hungry for fame and success. With meticulous, beautiful detail, Trigiani paints a rich, historical landscape of 1930s Los Angeles, where European and American artisans flocked to pursue the ultimate dream: to tell stories on the silver screen.

The movie business is booming in 1935 when 21-year-old Loretta Young meets 34-four-year-old Clark Gable on the set of The Call of the Wild. Though he's already married, Gable falls for the stunning and vivacious young actress instantly.

Far from the glittering lights of Hollywood, Sister Alda Ducci has been forced to leave her convent and begin a new journey that leads her to Loretta. Becoming Miss Young's secretary, the innocent and pious young Alda must navigate the wild terrain of Hollywood with fierce determination and a moral code that derives from her Italian roots. Over the course of decades, she and Loretta encounter scandal and adventure, choose love and passion, and forge an enduring bond of love and loyalty that will be put to the test when they eventually face the greatest obstacle of their lives.

"Blair Brown's acting talents are brought center stage in her performance of this fictionalized account of the relationship between Loretta Young and Clark Gable.... Underlying Brown's animated narration is a subtle emotional tension, and the layered performance highlights the laughter and tears, loves and disappointments in Loretta's and Alda's lives." ( AudioFile)

What listeners say about All the Stars in the Heavens

I read all of Trigiani's books, as they are released. This one was very readable, but a bit flat throughout since it had the feel somewhat of a documentary/TV movie. Bring back Big Stone Gap", Ms. Trigiani ... Simple settings and engaging characters!

Charming, nice entertainment, & ok for what it is

It was easy to listen to and seemed predictable. Interesting and through out the story wanted to seek out the characters and look for clues in the movies. Tough time to have any sort of dating in Hollywood and the consequences of being vulnerable.

Lovely story, beautifully narrated by Blair Brown. Fascinating tale of old Hollywood and the many stars that graced the silver screen. I remember watching the Loretta Young show as a child. My most vivid memory being of her walking through the stage door. What a beauty she was!

This was a very intertwining. yet relaxing read! I highly recommend it!

Not many stars for this one

Well written and a great narration and that is where my compliments end. I love Adriana and if you are looking for her usual type book this is not for you.
It was a semi- biography semi-fiction book about Loretta Young and Clark Gable's love affair and secret daughter- taken from many other books.She probably did quite a bit of research to write this book. I kept looking at my device wondering when the story was going to end. It seemed to keep plodding along forever. I am sorry I wasted my time on this when there are so many good books out there. However, it wasn't horrible - kind of like listening to pop songs on the radio. If you love old Hollywood stories then you will probably enjoy this.

I love Adriana Trigiani's books.
I think I understand writing a novel about Loretta Young - it's an interesting historical novel, a sort of biography - but it doesn't have the captivation of all her other novels. I missed the compelling charm of her story...

Great use of history

Loved it! I felt part of the story. It made me curios to learn more about Loretta and clark.

Soggy In The Middle

If you could sum up All the Stars in the Heavens in three words, what would they be?

A well know story of an illegitimate child of two movie stars, with a romantic spin. Slow story, with a great reader. No problems with the reader, just with the story!

The character of Alda is more interesting then Loretta Young and Clark Gable. However, the character of Alda just disappears about half way into the story, and the focus is on Loretta. Loretta was just too good to be true, and I missed finding out more about Alda and husband, Luca.

Which character – as performed by Blair Brown – was your favorite?

Easily Alda! From a nunnery to Hollywood, she was the most interesting, and the most unpredictable. Loretta was " a saint" and Clark Gable " a womanizer." No news there.

If you could rename All the Stars in the Heavens, what would you call it?

Somewhat disappointed in this book. Tragiani wrote so well in the Valentina series, and this book can be read on Wickipedia. As I said, the character of Alda was fresh and engaging, but she goes away too early.

Where does All the Stars in the Heavens rank among all the audiobooks you’ve listened to so far?

Definitely near the top!

I'm a HUGE Clark Gable fan,(so of course I was familiar with the story) and I adored this book. Adriana Trigiani is one of my favorite authors...loved the story, loved the detail, loved the insight into Hollywood's Golden era. It should be a home run for me then, right?
Sadly, everytime I felt all warm and fuzzy about the story or characters, there was a nagging voice in my head saying..."This is fiction, everyone involved in this story is dead, how do we know that happened?"

I wish that the author had told this story with fictional names, It would have been perfect!

This story is so beautiful. I didn't want it to end. It's an amazingly written account of the golden age of Hollywood. I now want to watch all of the old movies. The performance was fantastic.