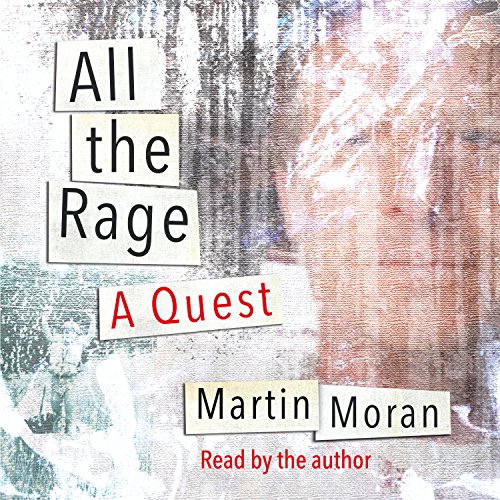 "Why aren't you angry?" people often asked Martin Moran after he told his story of how he came to forgive the man who sexually abused him as a boy. At first the question pissed him off. Then it began to haunt him. Why didn't he have more anger? Why had he never sought redress for the crime committed against him? Was his fury hidden, buried? Was he not man enough? Here he was, an adult in midlife, with an established acting career, a husband. A life. And yet the question of rage began to obsess him.

As the narrative jumps from dream to memory to theory, from Colorado to New York to Johannesburg, Moran takes us along on his quest to understand the role of rage in our lives. Translating for an asylum seeker and survivor of torture, he wonders how the man is not consumed with the wrong done him, only to shortly thereafter find himself in a wild confrontation with his fuming stepmother at his father's funeral. He admires a pedestrian's furious put-down of a careless driver, and then, observing with a group of sex therapists at an S&M dungeon, he finds himself unexpectedly moved by the intimacy of the interchanges. Hiking the Rockies with his troubled younger brother, he's confronted by the anger and the love that seem to exist simultaneously and in equal measure between them.

With each encounter we move more deeply into the human complexities at the heart of this book: into how we wrong and are wronged, how we seek redress but also forgiveness, how we yearn to mend what we think broken in us and liberate ourselves from what's past. It is in this landscape of old wounds and complicated loves that Moran shows us how rage may meet compassion and our traumas unexpectedly open us to the humanity of others.

What listeners say about All the Rage

Martin Moran's personal and moving story is written and performed with heartfelt insight, and honest humor. (I did, in fact, laugh out loud at his knowing asides.)
By bravely speaking of his personal life, his observations--and questions--about rage, remorse and forgiveness in our social and political world, engage the listener. Neither a sad nor angry tale, but an entertaining and informative exploration into "What if ..." and "How would ...". (With a sprinkling of showbiz too.)