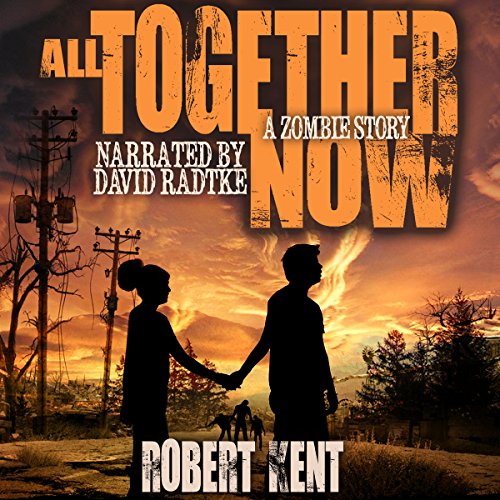 All Together Now: A Zombie Story

All Together Now: A Zombie Story

By: Robert Kent
Narrated by: David Radtke
Free with a 30-day trial

Fifteen-year-old Ricky Genero is writing a journal of the zombie apocalypse. His high school has burned to the ground, his friends are all either dead or shambling corpses roaming the earth in search of human flesh, and his best friend died saving his six-year-old brother Chuck from a zombie horde. When Chuck is bitten and infected with the zombie virus, Ricky must travel among the walking dead in search of a cure.

WARNING: This YOUNG ADULT novel is mean and nasty and intended for a mature audience. It is absolutely not appropriate for younger readers. All Together Now: A Zombie Story is a gruesome, repugnant tale featuring horrific acts of violence sure to warp young minds.

" All Together Now: A Zombie Story is by turns disgusting, terrifying, funny, and heartbreaking. Fans of The Walking Dead will eat it up like, well, zombies munching fresh brains. A stellar debut from a novelist to watch!" (Mike Mullin, award-winning author of Ashfall, Ashen Winter, and Sunrise)

What listeners say about All Together Now: A Zombie Story

Would you consider the audio edition of All Together Now: A Zombie Story to be better than the print version?

I've only been exposed to the audio versions of Kent's books, so I can't give a fair comparison. However, I think they are perfect for listening to in a long car ride with friends or your children, or even in the living room with the lights down low.

What was one of the most memorable moments of All Together Now: A Zombie Story?

I don't want to give away anything specific, but I will say that the relationship between Ricky and his little brother was extremely touching, and made the events that befall Ricky and his motley band all the more tragic.

Which character – as performed by David Radtke – was your favorite?

Easily Ricky, the protagonist. Ricky is capable, but unassuming, a lover of poetry and baseball, overall your average and likable kid. David portrays him with a sensitivity and angst that makes it all too easy to imagine a 16 year old Ricky, perhaps even a 16 year old David Radtke.

Yes. If my schedule had allowed it, haha! This is definitely one you'll be happy to lend a lazy afternoon to. Just don't listen to it before bed!

Having listened to a few of David's other narrations, I can honestly say this is some of his best work. He plays children, teenagers, girls, men and women of various ages and races, obese southern belles and demented religious cult leaders. There's even a few times when he sings A Capella in lieu of a church chorus ( no easy feat, I might add! One that would make most of us die of embarrassment!) All of David's characters are believable (or pleasantly exaggerated.) And he navigates them with consistency and flexibility. I look forward to listening to more works by both Robert and David.

I enjoyed listening to this one but it did take a bit to get into. I think I was thrown off a bit by the narration at first, which isn't bad at all, it just didn't match the age of the main character, in my opinion. Much of the story is told through journal entries. I thought the characters were pretty interesting and the outcome is different than what I have seen with most of this genre. I would recommend.

the story is ok

the story is alright, but the ending leaves a lot to be desired. up tobthe end I was right there with the author, but not at the end.

Anti-Christian - skip this one if that bothers you

Well written, great character development, not really YA. I enjoyed this book very much. The only thing I DIDN'T enjoy was the 15% of the book that revolved around a group of Christians and their church. You'll be stunned to hear that they were portrayed as stupid, evil, culty, suicidal/homicidal, and inexplicably read with a bizarre southern accent. If you are a regular reader of this genre you will at least be bored by this tired overdone plot device. At most, if you are a Christian or have any of them in your life, you will be annoyed if not offended. Too bad. It taints an otherwise fun book.

I like journal style zombie books such as Day by Day Armageddon and Apocalypse Z, especially when the author makes us feel like the character is really writing it that way. ATN did a good job using this format. There was a little too much backstory, though. I get that he was catching us up, but I got frustrated with how much was being told about the past once I knew what his current struggle was. I wanted to see him move forward.

The author does a very good job making me care for the main character, both with his relationship to the romantic interest and with his family. It didn't make me cry, as only two books have, but it was still pretty strong.

The ending was terrific and totally surprised me. I wasn't sure if I was going to give this a four or a three because I was able to put the story down for extended periods of time, but in the end I can recommend this book as a solid read. It may be I'm also not the ideal audience.

Aside from the lengthy backstory stealing momentum for me, I was also taken from the story by the narrator's method of dialogue tagging. I think he did a very good job on the voices and narration, but every time he added a dialogue tag the jolt between the dialogue and the tag made it feel obvious that he was splicing two tracks together. It happened so much I got pretty annoyed. I listen to audiobooks partly because I love how the voices can immerse me in the story, but when I am getting taken out of that experience as often as I was on this one, it makes me want to stop listening. The narrator did well enough on everything else that I'd listen to him again, but only after checking a sample to see if this problem has been worked out.

some parts just seemed you really drag song.You just want to help the characters get it moving.