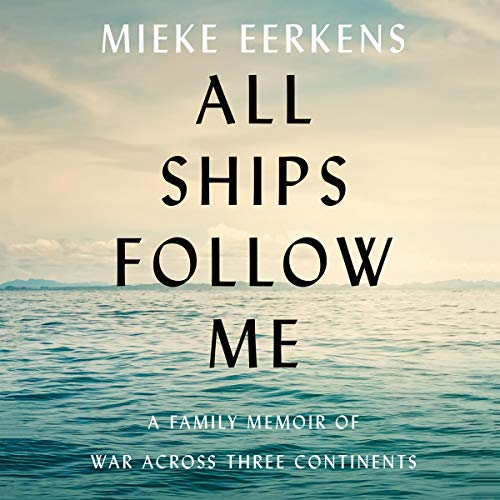 An engrossing, epic saga of one family’s experiences on both sides of WWII, All Ships Follow Me questions our common narrative of the conflict and our stark notions of victim and perpetrator, while tracing the lasting effects of war through several generations.

In March 1942, Mieke Eerkens’ father was a 10-year-old boy living in the Dutch East Indies. When the Japanese invaded the island he, his family, and 100,000 other Dutch civilians were interned in a concentration camp and forced into hard labor for three years. After the Japanese surrendered, Mieke’s father and his family were set free in a country that plunged immediately into civil war.

Across the globe in the Netherlands, police carried a crying five-year-old girl out of her home at war’s end, abandoned and ostracized as a daughter of Nazi sympathizers. This was Mieke's mother. She would be left on the street in front of her sealed home as her parents were taken away and imprisoned in the same camps where the country’s Jews had recently been held. Many years later, Mieke’s parents met, got married, and moved to California, where she and her siblings were born. While her parents lived far from the events of their past, the effects of the war would continue to be felt in their daily lives and in the lives of their children.

All Ships Follow Me moves from Indonesia to the Netherlands to the US, and spans generations as Mieke recounts her parents' lives during and just after the war and travels with them in the present day to the sites of their childhood in an attempt to understand their experiences and how it formed them. All Ships Follow Me is a deeply personal, sweeping saga of the wounds of war and the way trauma can be passed down through generations.

Beautifully written story of parallel existence of two children on different continents during WWII. Eerkens examines a perspective of history that isn't taught in American schools. I walked away feeling like I too had spent time in a Japanese prisoner of war camp. Skillful depiction of times that echo current happenings. I highly recommend and am looking forward to reading this story myself.

Eerkens sheds light on victims of war rarely considered with such respect and honesty. This is a really important read. Beautifully written and narrated, I highly recommend this book to anyone with an interest in the human condition, family relations, or anyone curious about current affairs, history or relationships through generations and ages. Despite the epic nature of the topics addressed in this book the writing is personal and the reading surprisingly effortless. Highly, highly, highly recommend!