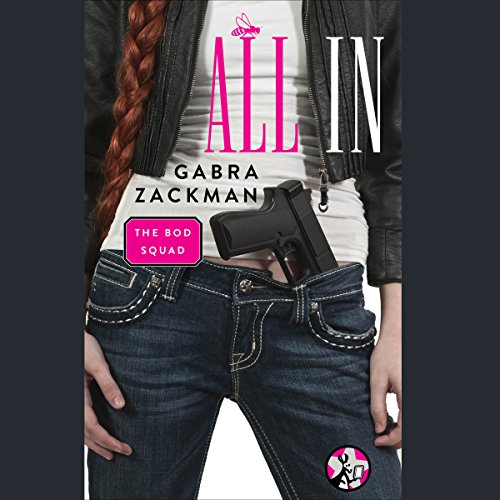 No bride wants to hear those words, least of all Susannah "Legs" Carter, one of the Bod Squad's best agents. But when her colleague Jackson bursts in with news that her presumed-dead father may still be alive - and possibly a double agent - the vows are on hold, and the Bod Squad hits the road.

Jackson wants to help, but he's a little distracted by Cajun cutie Lisa Bee, his closest coworker. They've always been friends, but there's nothing like a little overseas danger to set sparks flying! As the two work to track a criminal mastermind, will they swap undercover work for under-the-covers play?

Just so much fun!

Fantastic narration. An audio book is a narrator reading to you, this is a full cast performance that brings the story to life!

All In picks up exactly where Game On leaves off. You continue along with the adventure and get to know each of the characters that much more. The character development, dialogue and story stays true to form but is crafted with more care than your standard romance novel. A fun series that is at the top of its genre!

The Bod Squad goes ALL IN with more adventure!

Anyone who has ever belatedly realized that they are falling deeply for a friend/co-worker will instantly click with this second installment of the "Bod Squad" series of books. It's great fun that "All In" shares the spotlight this time around on Lisa Bee and Jackson so that we get to know them even better. I read the first book on my Kindle, so I loved hearing the audiobook for "All In" -- this cast really brought these diverse characters to life and filled in the colorful personalities (and accents!) that I had originally only heard in my head. There's a great deal of bawdy humor in both the book and the performances that had me smiling through the whole book, even during the tense "thriller" moments.

If you could take any character from All In out to dinner, who would it be and why?

Honestly, this book is the equivalent of a dinner party with a group of your oldest friends -- I'd want all of the characters to join me at dinner with a never-ending supply of wine coming our way so that we kept talking and laughing throughout the night!

Author Gabra Zackman has a bold, sassy voice (both in her writing and her narrating). I'm hooked on this series, and I can't wait for the next one to come out. I'm definitely going to start with the audiobook when it does.

I am loving this story and the characters are great! Keep it up Gabra!!! Got know what happens next!

All In, indeed! A must listen.

After listening to the multi-cast of Book 1 in this series, Game On, I couldn't wait to hear this book! It is as wonderful as I expected. The story continues to be sexy, romantic, and funny and I love the different voices.

Don't hesitate to jump into this engaging book!