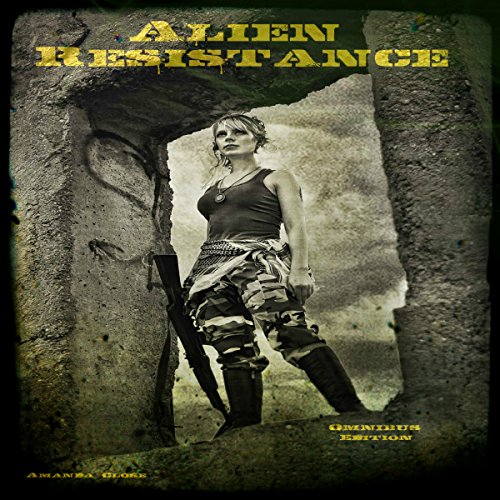 In the aftermath of World War III, a reptilian army emerges from the darkness of space to launch a ruthless campaign of conquest and genocide. All that remains of the world is a wasteland of concrete ruins and shattered architecture, now the dystopian battlefield upon which the human resistance wages its defiant war of survival against the invaders. Includes five books of the Alien Resistance series.

Not what I was expecting...

Alien Invaders and Human Resistance fighters sounded great. Unfortunately, this was not quite what I was expecting when I requested this book. While it is a book that many will enjoy, it's not a book I would listen to again or recommend.

To start with it needs to have erotica added to the category. Second, it needs to have a few disclaimers put into the description. I have no problem with sex in my books but most of the sex in this book was in no way sensual or romantic. Humans have to be drugged to be agreeable and have sex with the aliens. It has rape and sexual abuse by aliens, not just one but 2 or 3 at a time preforming gang rape as punishment and torture. So you get the drift. They aren’t even "sexy" aliens. They are described as kind of lizard-y things with 4 arms. Later some (hybrids) are described as "dragon" like, although no flying that I remember. Then there's the "brood" mother don't even know how to describe her.

Is there a story? Yes, in between all the unsexy sex. It's also a story that had a lot of potential, but was derailed with the before mentioned aspects of the story. The story starts right off with a sex scene between 2 resistance fighters which intrigues and arouses the alien(s) and from there the story takes the turn into all the graphic alien encounters. Is there a purpose to the encounters? Yes. It does have an effect on the plot and the outcome of the story, but some of it definitely could have been left out. Sometimes less is more.

This is the first time I have listened to a book narrated by Persephone Rose. He does a good job with the narration. I was actually surprised when the story started and it was a male narrator not a female. He has a nice voice that is easy to listen to for long periods of time. The narration was clearly spoken with a nice even pace. He has some really good character voices as well. Male characters especially. There was not any real difference between his male and female character voices. Although I'm glad he didn't do a high pitched female voice. It's cringe worthy when narrators do that. He was able to bring the story to life through his narration. Overall very enjoyable.

This is not so much a review as a warning

I listened to the first chapter of the book and thought it was great! Then, the second chapter turned into an extended sex scene between two of the protagonists. When I started the third chapter, it devolved into a gang rape/torture scene and I decided enough was enough.

I am not a prude, but I do think that books like this should inform potential readers/listeners that the book might be embarrassing to the listener when other people are around. Or, at least let the listener know that it includes graphic sex, including rape. I read the blurb and nothing in it warned me of this.

Might be OK for some readers/listeners, but I will not be finishing this book.

In the aftermath of World War III, a reptilian army emerges from the darkness of space to launch a ruthless campaign of conquest and genocide.

An enjoyable read that was made worth it by the narrator. Narration was good - I kept getting lost into the story.

Good book- great narration-- but not for me

Would you try another book from Amanda Close and/or Persephone Rose?

Yes---but I will look for less alien everything.

The narrator did a great job. I liked her performance very much.

I was voluntarily provided this free audio-book by the narrator in exchange for my honest review. This was not a bad story, I just couldn't get into the whole alien/human sex thing. Overall the story line was good, very sexual (with lizardy type aliens), I WILL look for other books by this narrator.

Amazon categorizes this title as military/alien science fiction, but readers/listeners should be aware that it's erotica in a military/alien science fiction setting. Accordingly, this is a good pick if you're looking for descriptive (and sometimes non-consensual) sex scenes involving aliens and/or humans, with a loosely described alien invasion plot connecting the sex scenes. If you're looking for an alien invasion story, you might find that this one is creative and somewhat interesting, but rather light in terms of plot, character development, and so on.

I have no complaints about the narration, but that's possibly because I was a wee bit distracted figuring out whether to listen to the story as a science fiction fan or an erotica fan....

I provided my opinion in exchange for a complimentary audiobook from the author, narrator, and/or publisher.

As the title says, this was like if Starship Troopers made a sex tape. The action was good, the story line was OK, in that it actually had one, but I thought the synopsis should include something to indicate the erotica. I thought it could have used more detail on why the aliens invaded and several of the explicit scenes came across a bit forced. Persephone Rose is a great narrator, I've enjoyed him on other audio books. If you don't mind the sex it's a decent book. Don't get me wrong, I've really like other books with heavy handed sex scenes, like the Good Intentions series by Elliott Kay, I just didn't feel like this one was missing something...

This definitely isn't for everyone. There's a lot of very descriptive sex scenes including aliens raping humans! Listen at your own discretion. With that being said I thoroughly enjoyed this book and recommend it to anyone who doesn't mind some really crazy sex stuff!
“I was voluntarily provided this free review copy audiobook by the author, narrator, or publisher.”

Could have been better without so much explicit sex

The story was good and I liked the description of the aliens. Least was so much explicit sex.

She does a wonderful job narrating. I've listened to several of her narrations and liked them all.

This is a story about the tenacious human rebels and an invading alien power that seems much more advanced and capable to conquer Earth. The story is good and the characters well written, but as stated before, too much explicit sex. I have voluntarily reviewed this audiobook after receiving an advanced copy.

If you could sum up Alien Resistance: Omnibus Edition in three words, what would they be?

Narrator keeps the story engaging. Exciting most of the way through. Occasional slow areas, but overall a great listening experience.

An interesting premise an alien race has invaded Earth and this is what happens next. People fight back and the battle keeps going. It is interesting seeing the setting move on between each part of this omnibus times change and the roles of these brave defenders change from heroic rebels to hated insurgents. It raises the point of what is worth fighting for and how much is freedom worth.

Amanda Close’s writing is of good quality throughout the story, interestingly it changes between viewpoint characters even within the same scene, this lets us see how the thoughts of the aliens are different than the humans which give you insight into them.

In my opinion, more plot and less sex would make this a far better listing experience, the world has clearly had thought put into it, the weapons the aliens use, their social structure, biology, how humans reacted to the aliens invaders and how that changed throughout the books.

The narration by Persephone Rose is good and suits the characters, making the aliens sound different than the humans. The recording is of good quality with no errors that I noticed.

Note this book contains graphic descriptions of an alien on human sex and a lot of it don’t get this book if that puts you off. If that is what you are looking for jump right in and you will not be disappointed.

This book really needs two different scores.
>If you don’t mind or you like the sex then this book is interesting alien invasion adventure with lots of sex and is worth listening to. 5/5
>If that's not your thing then this book is more like a 2 or 3 out of 5, a good idea with potential but far too much sex.