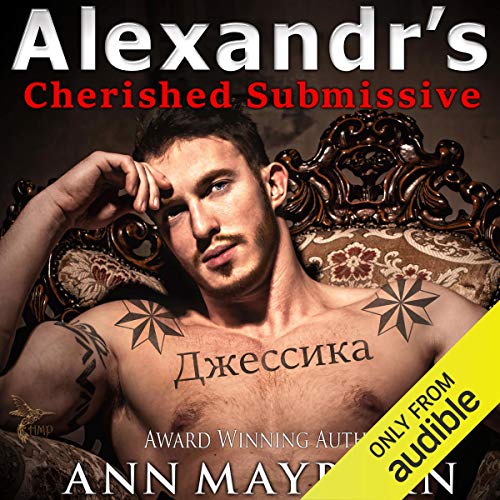 From the moment Alexandr Novikov met the young auburn-haired woman bartending at her uncle's pub in Ireland, he'd been fascinated by her delicate beauty and fiery spirit. Unfortunately, he is in no position to offer her the kind of safe, normal life she deserves so he attempts to put her from his mind for her own good. Something easier said than done when a deal is struck between the Novikov Bratva and the Irish Cleary Gang, an arrangement that includes Alex and his men being on 24-hour bodyguard duty with the object of his forbidden desires.

Jessica Venture came to Dublin to spend some time bonding with her birth mother's family, a connection she desperately needs after losing her adoptive parents within a year of each other back in the States. The last thing she expected was to fall in love with a handsome, mysterious, and sometimes scary man who was well known for his sexual appetite, but rejected her attempts to seduce him.

There are outside forces that will do anything to keep them apart, and Jessica will have to make a desperate choice that will change their lives forever.

A Story That Will Make You Wet Your Panties

Would you consider the audio edition of Alexandr's Cherished Submissive to be better than the print version?

I never read the print edition but the audio edition left me so hot that I had no choice but to get the other two audio editions that are out in this series. Would I go back and read the print version? No, I have my enjoyment and will just listen to this again to get my fix for this book.

The narrations. By having this version told with these two narrators, the reader gets more of what the characters are feeling. They had me feeling almost like a voyeur - which if they had been in the room while I was listening, they probably would have enjoyed it.

What about Edo De Angelis and Stephanie Wyles ’s performance did you like?

What I loved about Edo De Angelis' performance is that he brought the Russian characters to life. He made me wish that I had an easier time in learning languages. I never realized how sexy the language is. I'm a fan of his.
What I loved about Stephanie Wyles performance is she's the perfect compliment to the male narrator. The reader will have no trouble believing that the Jessica Venture character has come to life.
It's like listening to a movie without actually seeing the pictures but with listening to these two narrators telling the story I have no trouble playing the story out in my mind.

For me, it wasn't one particular moment but I could tell how much these two characters come to care so much for each other. The part that stirred the most emotion in me was when Jessica got some very painful news and became very afraid as well as angry.

Alex & Jessica are made for each other...

This is the first book in the series that I had read/listened to, so I don't know what I may have missed prior to this book. This is also the first book I have read from the author. With that being said... I started listening to the book and couldn't stop. I was truly intrigued with the story of Alexandr and Jessica.

Alexandr is everything you don't want for your daughter, sister, mother, friend, or any female you may know. He is the love them and leave them type of man, but he definitely does not hide that about himself. He does hide who he truly is and what he truly does from most people around him, but he has his reasons for that.

Jessica comes into the story as an innocent young woman, meeting her biological mother's family for the first time. She starts learning about a world that she never knew and she meets people that are out of her league. Her innocence is no match for what Alexandr is going to bring into her world.

The bond that grows between Alexandr and Jessica is strong and no one can break the two apart. Their worlds are mixed and their families are all involved in keeping them together or making breaking the apart.

The narrators used a voice that I could picture with the characters. And it was authoratative when necessary.

I can't wait for the next installment!

Where does Alexandr's Cherished Submissive rank among all the audiobooks you’ve listened to so far?

This rates #1 for me in the books I have listened to so far. Edo De Angelis and Stephanie Wyles made Alex and Jessica come to life in a way I don't believe any others could have.

Alexandr is by far my favorite character, the way he draws Jessica out of her shell and into his life is both annoying and loving. His intensity both in his life and love is almost overwhelming.

Have you listened to any of Edo De Angelis and Stephanie Wyles ’s other performances before? How does this one compare?

This is the first audio I've listened to with them together, they made all the characters come to life with all the complete range of emotions that is imperative to this story. They are both incredible with the accents, bringing something different to each character so you know exactly who is speaking.

This is not your typical love story.

I had to giggle a few times especially where Dimitri was with Alex and Jessica. But keep those tissues handy, you'll need them!

This is a good series but the fourth book is not on Audible!! UGH! What a bummer to get to the end of the series and find it is not complete!

I wouldn’t of listen to it if I knew it was a cliff hanger. By the time part two comes in audio i won’t remember part one. The story could of been edged down to include an ending but it wasn’t.

Disappointed about the ending

I’m not entirely sure why it ended the way it did. The story was good until it left us hanging.

Sometimes Jessica’s thoughts or thought process was just too cumbersome/irritating. Maybe it was the voice narrator - couldn’t quite decide.

Just listened to this audiobook for 3rd time and loved it. Characters were great . Loved the narrators , they did an excellent job. I have to say they really made the story come to life. I want my own Russian lover. Please, PLEASE get the 2nd book into audio with the same narrators ASAP. I read the second book in this series, but nothing comes close to listening to it by the same narrators.

I loved this book it was fantastic from the beginning to the end and it left me wanting more I highly recommend it to everyone the character in the story was brilliant.

Loved the story. Ann Mayburn knows how to craft her stories. The narration was superb and when do we get Book 4 in Audio? Ann keep on churning them.

Not the best ending, l was looking for another book. He hasn't seen his daughter, we don't know how the nanny going to let them take her and the child to the father who is dead, no idea how she is going to react when she come to and what is going to happen between Alexander an daddy a real cliffhanger.