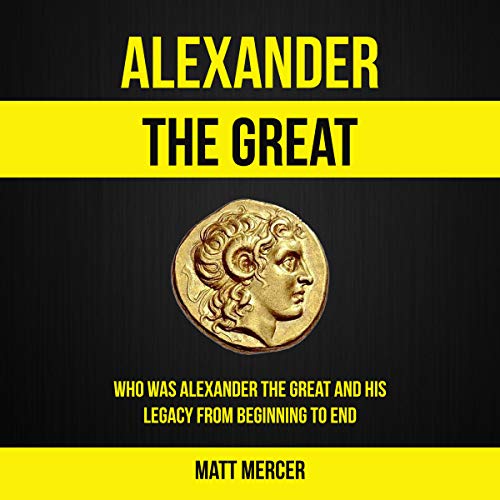 By: Matt Mercer
Narrated by: Becky White
Try for $0.00

Everything we know about Alexander comes from ancient sources, which agree unanimously that he was extraordinary and greater than everyday mortals.

The son of the great King Philip II of Macedonia, Alexander was educated by Aristotle and commanded a wing of his father's army in the victory over the Thebans and Athenians at the Battle of Chaeronea - all when he was still just a teenager. By the time of his death at age 32, he had amassed an empire that stretched from the Adriatic Sea to the Indus River and included all of Persia and most of Egypt.

His victories won him many supporters, but they also earned him enemies. This easy-to-listen-to biography offers a fascinating look at the life of Alexander and the world in which he lived.

Alexander's influence on cultural and political history and the scope of his military prowess remains awe-inspiring to this day.

Alexander Made Greater by Mercer and White

Mr. Mercer's efficient, clinical writing is at once taut and methodical, forensic without bloat. Equally, Ms. White's crisp delivery is a professorial presentation without being didactic, energetic in its pace and possesses enthusiasm in a conversational manner that might otherwise elude other narrators' choices, tempted to liven in up. I also find myself listening 'interactively' looking up facts and names online, going back and re-listening to passages. Bonus for pronouncing with clarity and accuracy. My goodness. I do not think I would be able to so 'nail' my own lineage's names!!! Kudos, Ms. White!

I had bookmarked this title with an-ever-delayed note to listen and finally did so this week. Timing is, indeed, all and I believe everything unfolds perfectly. First, had I listened prior to September 2019, I might be less attentive. I traveled to Greece with my father last autumn, a first trip for both of us. I will most certainly recommend this title if not outright gift it to him, as he has a passion for ancient history. Second, this last Sunday, with no thought to this title, I started to wear my necklace: one side the face of Alexander; and the other the Sun of his flag.

Another good and fair priced introduction to Alexander the great.However there seems to be an repeating theme esp with N.American narrators.They cannot pronounce the names and words of the Hellenic world properly.Antipater and Nearchus being prominent.With these small exceptions an easy listen with some good well researched facts.