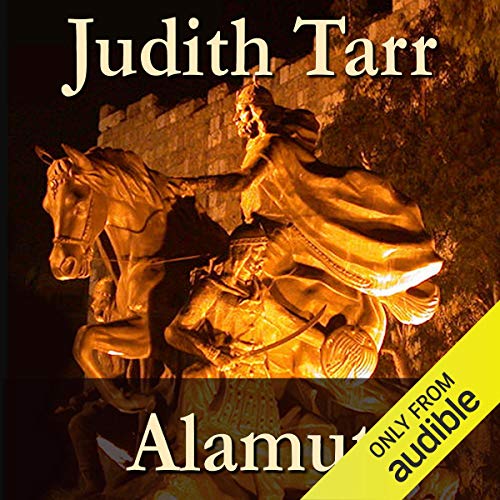 By: Judith Tarr
Narrated by: James Patrick Cronin
Try for $0.00

A knight from across the sea, a beleaguered kingdom, a spirit of fire with a deadly secret - Judith Tarr's beloved novel of grand romance and high magic in the age of the Crusades appears for the first time in digital form. Join Prince Aidan, son of a mortal king and an immortal enchantress, and the deathless Assassin Morgiana, in a saga of war and truce, betrayal and honor, hate and love.

What listeners say about Alamut

What disappointed you about Alamut?

The story is standard epic, filled with oversized heroes, magic, etc. The language is a bit overwrought, as per the formula for this type of story. However, I found this a very difficult book to listen to due to the combination of the wording and the poor narration.Trying to keep up with the cast of characters was a chore, as everyone sounded exactly alike. The pacing of the reading was also just off enough to cause complete confusion.

A: My father was mortal.
B: Your mother was not.
A: Her daughter was.
B: And her daughter's son.

Now imagine the above read in the same voice, and the same tone of voice, in a flat mid-western accent. It was irritating.

Not a book by Judith Tarr.

Who would you have cast as narrator instead of James Patrick Cronin?

Listen to the excerpt before buying! I didn't and am really regretting it.

Mixed Bag of a Book

Donna Tarr’s “Alamut” is an alternative history of the Christian Crusader Kingdom of Jerusalem during the reign of Baldwin IV, aka The Leper King, and several years prior to Saladin's defeat of the Crusaders (sometime between the Second and Third Crusades). This story follows Prince Aidan who is a celebrated Christian knight who loves his equally magical twin King brother and human sister and their families. He arrives in Jerusalem to learn his nephew (human sister’s son) has been slain by an Assassin while he slept with his wife. He vows to find and kill the Assassin and his master, the Old Man of the Mountain. Along the way he travels to Damascus and Aleppo and learns more about Muslim culture and traditions and even manages to meet Saladin. He also meets the Assassin who, much to his surprise, is a woman. What adds a different twist to the tale is that both Aiden and Morgiana, the Assassin, are faerie folk or ifrits (as they are called in Islamic areas). They are immortal (or close to it) and are very attracted to each other.

I really tried to get into this book but had the hardest time. There were so many times I DNFed this book but I couldn’t get the praise that others have written out of my head. “Alamut” was released in 1989 and was considered a spectacular book that fit into multiple genres (fantasy, historical fiction, science fiction, and romance). I should have loved this book as it has assassins, murders, sex, fights for power, and strategy for all kinds of things. All things an action, fantasy, historical fiction book should have, but I found the story longwinded. It was impossible to get fully into the first half of the book. The latter half was where I finally found a way to get into the action. The narration of the audiobook kept me from DNFing as I found Mr. Cronin's voice nice to listen to. I'll be looking for more audiobooks that he narrates in the future. If this had been a physical copy I would have DNFed this book around page 141-173.

Even though I was able to like the book it still was a bit ridiculous. Aidan’s boy army are alive, but I have no idea how they could possibly be alive. Somehow, they ended up lost in the dessert, fighting off wolves and bad guys controlled by an immortal assassin, go back to where they were given to a man, then go with the guy's lady love to a certain city ONLY to go back to where they were given to the guy to wait for him... I understand that these are the times of Templars with knights, kings, and princes, but this just seems like complete nonsense that they would have let their master out of their sight when they adore him and cuddle with him at sleep and not even look for him.

The romance was the best part of this book, in my opinion. There was a love rectangle and it was decently executed as one of the sides was set aside, so I guess it was more of a love triangle. The sex scenes were nicely done; not smutty but enough to get the feelings of love and underlying ones the characters had. The outcome of everything wrapped up tidily and a part of it bothers me. It was too simple of a solution and I find it hard that nobody would figure things out with all the smart people around in their family. It’s like saying “if I will it to happen then I can not only be around my child but no one will find out that it’s not supposed to be mine” and it will because you’re good looking and charming to women, teens, and children. This book made me feel like I was losing my mind since things seemed nonsensical yet interesting at other times.

I’m giving this book a soft 3 star rating. “Alamut” is my definition of a mixed bag as I both dislike and like aspects of it. The action is there but could have been better since it was boring about 55% of the time. The romance was the best part, but it seemed clipped near the end as the author seemed to feel it was time to wrap up her own story. Honestly, I’m not sure if this book needed to be longer or shorter to be a more complete book but it missed the mark for me. I won’t be continuing this duology or reading any other Donna Tarr books.

I do not usually indulge in romance or fiction but this book, combined with the mindful narration, had me wanting to do nothing but listen. I cannot recommend this enough.

Atmospheric and spellbinding - a wonderful author

Some of my favourite books don't translate too well to audio format, but it's perfect for this book - really builds up the pictures in the mind.

What other book might you compare Alamut to, and why?

The Dagger and the Cross - the sequel

What does James Patrick Cronin bring to the story that you wouldn’t experience if you had only read the book?

He reads well and does different characters well, both male and female. It made me look at the book from a different viewpoint - I have owned the book for many years.

Magic and mystery - fantasy of an alternate history

I have bought many books I already own as audio books as I can listen while driving, gardening or doing any other chores