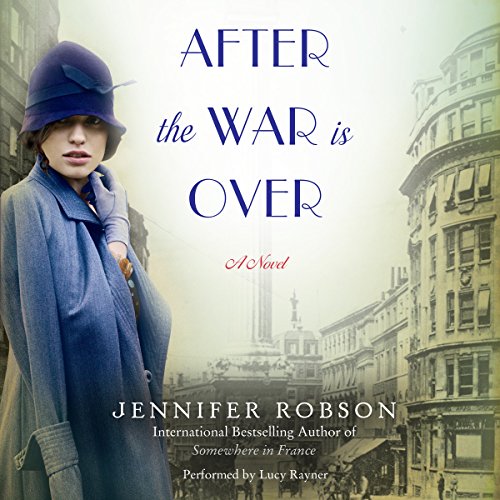 After the War Is Over

After the War Is Over

By: Jennifer Robson
Narrated by: Lucy Rayner
Free with a 30-day trial

The internationally best-selling author of Somewhere in France returns with her sweeping second novel - a tale of class, love, and freedom - in which a young woman must find her place in a world forever changed.

After four years as a military nurse, Charlotte Brown is ready to leave behind the devastation of the Great War. The daughter of a vicar, she has always been determined to dedicate her life to helping others. Moving to busy Liverpool, she throws herself into her work with those most in need, only tearing herself away for the lively dinners she enjoys with the women at her boardinghouse.

Just as Charlotte begins to settle into her new circumstances, two messages arrive that will change her life. One is from a radical young newspaper editor who offers her a chance to speak out for those who cannot. The other pulls her back to her past, and to a man she has tried, and failed, to forget.

Edward Neville-Ashford, her former employer and the brother of Charlotte's dearest friend, is now the new Earl of Cumberland - and a shadow of the man he once was. Yet under his battle wounds and haunted eyes Charlotte sees glimpses of the charming boy who long ago claimed her foolish heart. She wants to help him, but dare she risk her future for a man who can never be hers?

As Britain seethes with unrest and postwar euphoria fattens into bitter disappointment, Charlotte must confront long-held insecurities to find her true voice... and the courage to decide if the life she has created is the one she truly wants.

What listeners say about After the War Is Over

I would have liked more emphasis of the history ( England's struggles to assimilate the changes following WWI ). The romance was sweet but unrealistic, and the "happy ending" was rushed and too easy. Excellent narration, though.

The book switches back and forth in time, which was a little confusing as an audiobook, so the chapter headings that indicate the year are important to pay attention to. Lucy does the female voices well, but I didn’t care for her male voices, especially Edward.

Refreshingly written as to charm and enchant the listener. Restores faith that books are still written where the characters actually have character and make good decisions for which they are ultimately rewarded.

Captivating story, too long for audible

The story is informative and very engaging, but it could have been shorter. I love books where strong independent women play a strong role.

Not yet the 21st century Jane Austen....

Would you try another book from Jennifer Robson and/or Lucy Rayner?

Not necessary to have read Somewhere in France to appreciate this "sequel"--devoted to a different (though connected) heroine. Despite referencing Pride & Prejudice at a key interchange in the novel, Robson is both too predictable, and too unrealistic, to pull off the requisite "happy" ending.

While some of the heroine's flatmates might well be annoying dimwits, Rayner's ability to capture their annoyingness did nothing to enhance the enjoyability of listening to those scenes.

One of the characters at one point calls the heroine a "self-righteous prig." While she at least has the decency to question herself about the comment, she fails to rise above the charge.

I loved the story.

It was a little predictable but I really liked the writing. I loved the first story as well.

I felt like I was in post WWI England & I loved the character of Charlotte. however the story moved rather slow.

I have to really like a book to give it five stars. I am so disappointed that I've finished this one. It feels like I've lost the comfort of good friends. I loved living in Charlotte's world.

Jennifer Robson entranced me with SOMEWHERE IN FRANCE and I wasn't sure this sequel would meet the same standard. It did! The history, the characters, the emotions - excellent!

The narration was good. If I had to find one flaw (actually I have two) it was that the women's voices were a little "whiny." Not a deal-breaker by any means. The second flaw, again not a reason for me to downgrade my rating, was the story of the police strike. It was very tense for a while but it didn't really develop.

But I truly loved this book and I miss it already.