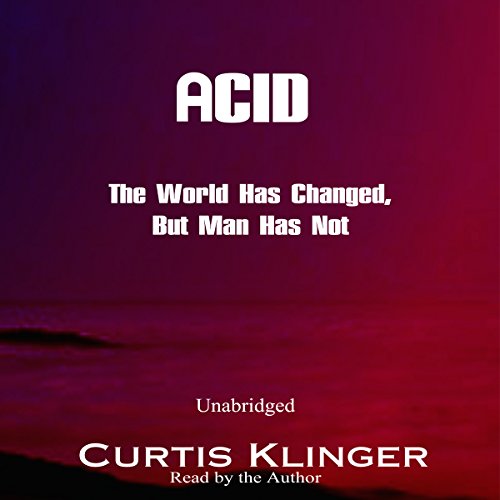 Acid: The World Has Changed, But Man Has Not

The once beautiful earth is now nearly dead. No winds blow - the weather never changes. Filling every valley and all the low lands, acidic clouds the color of cinnamon lay heavy as they have for the past 50 years. Where the red cloud meets the mountains is known as redline; nothing lives below redline. Without protective clothing and breathable air you will quickly die below redline. Only a few merchants and traders scavenge below redline. Because of the deadly atmosphere, people now call the Earth: ACID.

The remains of mankind live in cities clinging to the highest mountain peaks. These cities provide meager residence. Travel is limited to dangerous hydrogen filled airships. The world has changed but men's lust for pleasure has not. Preying on isolated pockets of humanity are pirates who deal in human slavery for pleasure.

Twenty-four year old Noah Palatin has sworn revenge against the pirates who murdered his father and commandeered his father's unique airship. His quest brings him in league with new found friends who become his family. Together they battle their way through adventures and strike a blow against the sex pirates. Unexpectedly, his adventure takes him into his heart as well.

What listeners say about Acid: The World Has Changed, But Man Has Not

I am in love with this book!

All the characters and character development makes you feel as though your apart of the story. The landmarks were all so wonderfully planned out perfectly. The action, comedy, and a small dash of romance makes for the perfectly baked book.

I personally think everyone should read (listen) this. - Princess Brie (Gabrielle)

Loved it. Enjoyed the humor. Plot twists kept ahead of my guesses. I like Curtis's narration. Made for great listening.