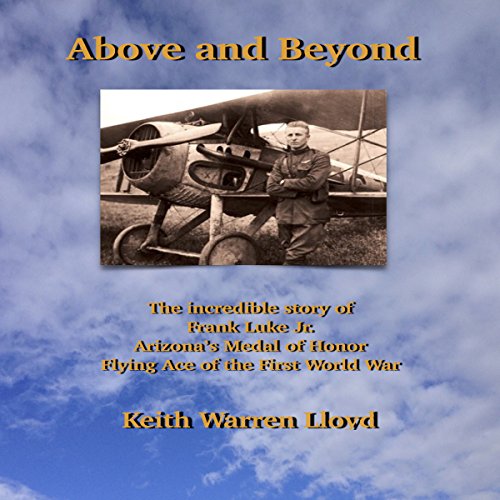 By: Keith Warren Lloyd
Narrated by: Joseph Mick
Try for $0.00

Above and Beyond is the incredible true story of Frank Luke Jr., the first aviator to receive the Medal of Honor. When America entered the First World War in 1917, Luke became a fighter pilot in the newly formed US Army Air Service and was soon serving with a combat squadron in France.

Seen as a "high-strung, excitable boy," scorned by his squadron mates, and frequently at odds with his commanders, Luke soon became one of the most revered fighter aces on the Western Front. Exhibiting great audacity and skill in combat, he quickly racked up an impressive number of air-to-air victories, many of them against heavily-defended observation balloons which few pilots dared to attack.

Above and Beyond chronicles Luke's most daring mission of all on September 29, 1918, which cost him his life, and for which he was awarded the Congressional Medal of Honor.

What listeners say about Above and Beyond

I was provided this free review copy audio book by the author or narrator." This review is for the audio copy of: Above and Beyond: the Incredible Story of Frank Luke Jr., Arizona’s Medal of Honor Flying Ace of the First World War by Keith Warren Lloyd and narrated by Joseph Mick. I had always wondered how Luke Air Force Base came by its name. I have lived in Az for 51 years, much of it in the vicinity of the air base. This book explained it to me. This was a great history book about a great person. I really enjoyed storyline, the way it was laid out and the progression. The Narrator did a great job of reading it. His inflection, cadence, and timbre made it easy to listen to. I recommend this book and narrator.

Great Material – Not Great for Audio

This is a biography of a World War I aviator and Medal of Honor recipient (posthumously.)

As an audiobook this was not good material for a performance. It was full of facts, information and lots of references to Frank Luke Jr.'s shenanigans. There was no story to perform, it was more of a laundry list of accomplishments (he was a true patriot), great for research.

If you would take a moment and select 'helpful' directly below, I would really appreciate it. Please consider following me on Audible.

Above and Beyond tells of Frank Luke Jr., a World War One aviator who was posthumously awards the Medal of Honor. The book tells of his character and upbringing, how he did not get along with most of his fellow pilots (he comes across as arrogant or overconfident, while also standoffish), and how he pushed the skills and abilities of the team beyond what was thought to be possible.

For research and information this book could be 5 -stars. It covers a piece of history that is not overdone in books - the air war of world war one - and goes into great details about the people, planes, tactics etc. It is just let down by generally humdrum, stilted, and occasionally jumbled writing. The narration doesn't help at times either, as it too is stilted in places.

The book jumps around a bit within chapters, as it runs off on tangents or telling backstories or technical details. While hugely informative, it doesn't flow great.

Narration by Joseph Mick is okay. He takes some time to warm up to the book, with the first few chapters not flowing well and there being awkward pauses throughout the sentences. But once he get going this (mostly) drops away.

This biography is well written. It briefly covers Frank's childhood and how that shaped him ass a person and then focuses on his service in the air force during WW1.

It's well written and I liked that it was specific about when it uses recorded events and when there is conjecture about what occurred.

A brave and driven young man and a tragic ending. This is well worth listening to.

The narrator did a good job, the pacing and tone work well with the material.

While a short book, it achieves what I assume to be its main goals of telling an important story, and engaging the reader/listener. The author spends about 15 minutes on Frank Luke Jr.'s childhood, as well as some time on his entrance into flying and some relevant aspects of the war itself so that the main story does not sit alone in a vacuum.

It's very clear that as much research as possible was done, and the author mentions when facts are not known for certain or there are differing versions of the same event. Because of this, there's not much detail in the 'battle scenes' of the book - aerial victories are most "he shot down the enemy," missing the blow-by-blow accounts that a memoir would have - though I prefer this approach over the author having invented his own version of events.

Occasionally the wording of the book sounds like it's trying a bit hard to be dramatic, and the author frequently changes between referring to Frank Luke Jr. as "Frank" or "Luke" without any consistency that I could tell.

The narrator does a good job, with the audio being clear and constant volume. Occasionally a foreign word was mis-pronounced, but most were not, and comma pauses are longer than I'm comfortable with - but the sample provided is accurate to the rest of the book for buyers to decide for themselves.

Despite minor gripes, this was definitely a book that I didn't want to pause or put down. Chapters vary from 6-23 minutes and line up with the book chapters, making it easy to know when your next break is coming.

I was provided this audiobook at no cost in exchange for an honest review.

Exciting tale of a great warrior.

If you could sum up Above and Beyond in three words, what would they be?

What other book might you compare Above and Beyond to and why?

This is a difficult question for me because this book was outside of my usual fare. I enjoyed the book quite a bit.

What does Joseph Mick bring to the story that you wouldn’t experience if you just read the book?

He narrated the book very well and made it so that I could enjoy it. Very well done.

I did feel for Frank Luke when he found out about his friend.

I requested a free review copy of this audiobook and I am leaving a voluntary and honest review.

A gripping biographical account of the valorous service of a 21 year old American in WWI, against German Observation Balloon crews in France; Above and Beyond jumps right into the heroic life of a young officer who pursued the enemy relentlessly. The German "Drachen" (dragon) balloons were used to collect information on troop movements, and taking them out became a primary goal for Frank Luke, Jr.  The book reveals the trials and heart-rending struggles of those of German descent during the war, when their own loyalty was called into question. In just a few weeks time, Luke became the Ace of Aces, before he died in battle. The book reveals the human side of war, and how deep the struggles ran on and off the battlefields.  I requested and received a free review copy of the Audible version. The narration was performed superbly by Joseph Mick. The Audible version of the 118 page book is about a 2.5 hour read. I highly recommend Above and Beyond for readers interested in aviation, and WWI history.