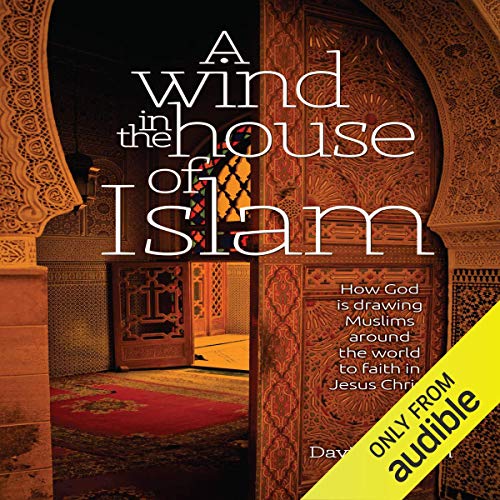 A Wind in the House of Islam

There are nine rooms in the House of Islam and the Wind of God's Spirit is blowing through every one of them. David Garrison spent three years travelling a quarter of a million miles through every corner of the Muslim world to investigate reports far and wide of Muslims turning to faith in Jesus Christ. In this amazing odyssey, Garrison gathered the stories of more than a thousand Muslim-background believers, asking them the question: What did God use to bring you to faith in Jesus Christ? Tell me your story.

The result is a historic and unprecedented insight into the greatest turning of Muslims to Christ in history. Hear the stories of men and women who have sacrificed everything - home, family, even their lives - for the sake of following Jesus. In this book, you will hear from men and women from West Africa to Indonesia and everywhere in between. You will see how God is at work through answered prayers; dreams and visions; 21st-century technologies such as Internet, satellite television, video, and audio tools; and bold Christian witnesses who have often paid the ultimate price for the sake of reaching Muslims for Jesus Christ. Along the way, you will also gain insights into the fascinating background of each of these nine geo-cultural rooms in the House of Islam. Finally, and most importantly, you will learn how you too can be a part of the greatest turning of Muslims to Christ in history, both overseas and in your own community.

What listeners say about A Wind in the House of Islam

This book starts a little slow as he goes through the methodology of the study. Stay with it because as he gets into the interviews themselves they're very rich and spiritually insightful.

Very inspiring, and well written. The author did excellent study on this subject . Has lots of great stories and many ideas on which you can contemplate.

A Thorough Journey about God's Work Among Muslims

A very interesting, exciting an informative book about God's work in the Muslim world. Everyone who wants to understand more about it should read it. A little slow at the very beginning, but brings great pace and excitement from that point on. It's also a great book to understand the historical background of Islam throughout the world and its impact on cultures.

A powerful insight into God's impact in the Muslim world. This book has changed my heart for the people who practice Islam.

I learned a lot and will defintely read this again and recommend it to others.

David Garrison has done thorough research around the world for this book. His empathetic portrayal of Muslim cultures and histories adds to the work. Anyone who is wanting to know what God is up to below the radar of CNN and NPR will do well to read/listen to this work

Very well done. It was a very good read.

Great book! The performance and the contents of the book were capturing. It is a must read for anyone wanting to do ministry to Muslims.

Wow. Hard to put down.

Amazing! You will end each chapter worshipping God for what he is doing to bring about new life throughout the world. One of my favorite books.

fantastic (20 words are required for the title.

fantastic (20 words are required for my write up. so here are my 20 words. i think fantastic is good enough)

I feel like I know a lot more about Islam now

The author gives some great insights into how Islam came about in history and how to use this information to help reach out to Muslims today.

This is a wonderful book, thoroughly researched and very good overview not just off God's work in the Muslim world but also of how we as belivers need to approach Islam and Muslims. So pleased to have been able to read it at last because it's available on audio. Excellent narration.

A book every Christ follower must read. Excellent!! Powerful, exciting how Chirst name is being glorified

Hope for the future

A book everyone would benefit by, giving the reader a greater understanding of the Islamic faith

A fresh, well-balanced look at the world of Islam today. Well researched and very educational. The reader gains an insight into the diversity among the nations and factions within the religion, learning from individual personal stories.

The book offers encouragement and hope for the Islamic world and also for those praying for Muslims today. The narration is steady and evenly paced. Easy to listen to. An excellent account concerning the work God is doing among Muslims today, and how He is leading our brothers and sisters in Christ.

a fantastic exciting Insight into.what God is doing in the Muslim world and from quite a neutral view point

An Awakening to God's heart for the Moslem

Really appreciated all the research that took years to accumulate, so each chapter and life story was authentic, challenging and life changing to read.