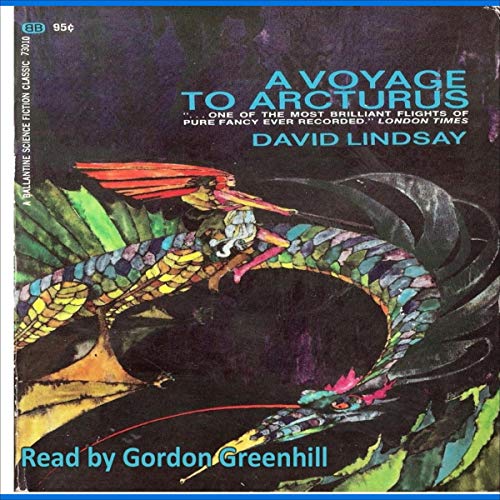 A Voyage to Arcturus

By: David Lindsay
Narrated by: Gordon Greenhill
Try for $0.00

A stunning achievement in speculative fiction, which critic Colin Wilson called the "greatest novel of the 20th century".

A Voyage to Arcturus has inspired, enchanted, and unsettled audiences for decades. It is simultaneously an epic quest across one of the most unusual and brilliantly depicted alien worlds ever conceived, a profoundly moving journey of discovery into the metaphysical heart of the universe, and a shockingly intimate excursion into what makes us human and unique.

After a strange interstellar journey, Maskull, a man from Earth, awakens alone in a desert on the planet Tormance, seared by the suns of the binary star Arcturus. In a sort of agnostic's Pilgrim's Progress, he journeys northward, guided by a drumbeat, encountering a world and its inhabitants like no other, where gender is a victory won at dear cost; where landscape and emotion are drawn into an accursed dance; where heroes are killed, reborn, and renamed; and where the cosmological lures of Shaping, who may be God, torment Maskull in his astonishing pilgrimage.

At the end of his arduous and increasingly mystical quest waits a dark secret and an unforgettable revelation.

Influential on such fantasy notables as C. S. Lewis and Philip Pullman, A Voyage to Arcturus was the first novel by writer David Lindsay (1878–1945), and it remains one of the most revered cornerstones of science fiction.

What listeners say about A Voyage to Arcturus

Loved it. I cannot believe that was written in 1920. I will forever have beautiful mental images of other words burnt in my mind.

This is not Victorian Science Fiction. It's an allegorical journey through the mind of an insane and spiteful god. This is the Pilgrim's Progress of Gnosticism. Everyone Maskull meets dies, usually due to Maskull's ignorance. And when Maskull meets himself, he too ceases to exist. But that's not the end of the story...

I can see how this book was interesting in 1920. In 2020, it is just absurd. It is less SciFi than someone's weird dream through 1920s philosophical modes.

Gordon Greenhill did well reading it; he employed a number of character voices that matched well the narrative descriptions.