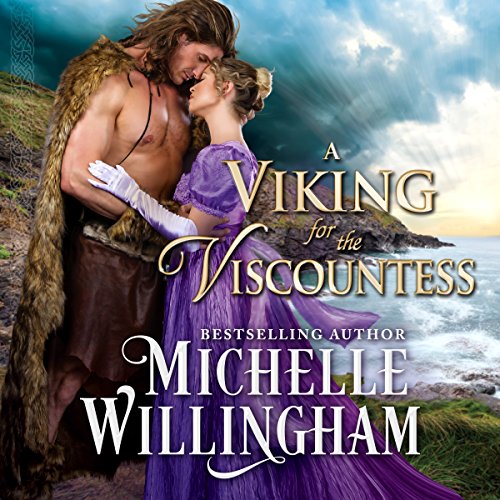 A Viking for the Viscountess

By: Michelle Willingham
Narrated by: Brad Wills
Try for $0.00

Juliana Arthur, the Viscountess Hawthorne, has been thrown out of her husband's estate and her marriage declared invalid. With a small son to care for, she desperately needs a strong hero to rescue them from poverty and suffering.

A Viking wasn't quite what she had in mind.

Arik Thorgrim is caught between worlds. After dying from a battle wound, he expects to find the glory of Valhalla, where he can dwell among the gods. Instead he's brought forward 1,000 years in time, to a beautiful woman who tempts him beyond reason. Juliana doesn't know what to do with this sinfully handsome Viking warrior who brings weapons into a ballroom and refuses to be tamed. Yet beneath his barbaric ways is a man of honor, a man who vows to face down her enemies and fight for her son's future.

But as Arik wages a battle against her heart, Juliana is afraid of loving a man whose time has already run out.

What listeners say about A Viking for the Viscountess

I enjoy time travel romances so I got excited about this book as soon as I read the publisher's summary. 😁

This book keeps your attention throughout with memorable characters and a plot that doesn't disappoint This delightful story takes you on a fantasy journey where wishes & dreams mix with reality and the lines of time become blurred. It is heartfelt and charming with more of a lust to love progression that captivates. If you enjoy historical time travel adventures then don't hesitate on this book.

Brad Wills is an exceptional narrator. He never disappoints me. 😋

Note: This is an Adults only listen. It contains detailed sex and language.

I received this book from the author, publisher, or narrator and am grateful to them for the opportunity to review. I am looking forward to the next book in this series.

What did you love best about A Viking for the Viscountess?

This is my first book by author Michelle Willingham, but it definitely won't be my last. I am a fan. This book is brilliant, unique story line, well written and romantic. I loved it. I hope she puts the entire series on audiobook, because you don't want to put this book down.

Which character – as performed by Brad Wills – was your favorite?

Brad Wills delivers an outstanding performance. That is the difference between Mr. Wills and other narrators. Mr. Wills truly performs the books he narrates. He is creative with character voices, delivers the story with passion and care. I say care, because he really is intuitive as to the sensitivity of the storyline. Outstanding Brad Wills. Loved it.

This was a wonderful story and Brad Wills hit this one out of the park! Don't miss it!

I had a hard time believing this story for many reason. The author put a new twist on time travel, the heroine and getting what should have been hers. She is married but is she and where is her husband? Is he dead or alive, he has been gone for so many years. There isn’t a lot you can say without giving the plot away. There is some interesting reading but a lot of repeats that aren’t needed. The twists and turns are good but it just is not very believable.

I thought Mr. Wills narrator was good. The Viking voice fit, his normal voice is very pleasant, he male and female voices are good. He gives a lot of emotion into his character voices. There are no repeat of words, no volume changes, no background noises, if any breaks were taken I could not tell. The narrator delivers a very clean and clear audio that is very enjoyable. His normal voice is very pleasant and has no trouble delivering the emotions of the characters.

For the parts I didn’t care for there were just as many that I did. I loved how the child was treated and not talked down to. The twists were good along with a few of the surprises. I have a hard time that her husband got away with what he did. I really felt for Juliana and her son with all they had to go through.

Would you consider the audio edition of A Viking for the Viscountess to be better than the print version?

I couldn't answer this question honestly.. I used both and enjoyed both.

The viking of course!

Have you listened to any of Brad Wills’s other performances before? How does this one compare?

No I have not but he did an excellent job

I must admit i bought this before I went on vacation last min. I thought what a strange mix , but I would give it a whirl. I definitely was NOT disappointed. I will read more from this author .... Thank you michelle willingham for the wonderful novel.

Brad Wills brought Michelle Willingham's characters to life. I read the book but was intrigued when I heard he was her narrator. I could listen to him for hours. I hope she uses him for all of her books. I'll be looking g for his next narration for sure.

A Viking For the Viscountess (A Most Peculiar Season #1) by Michelle Willingham is an entertaining historical romance with a unique spin on time travel. The time traveler is Arik Thorgrim, a Viking from the year 811. After dying on the battle field, he is saved by the gods and transported to Regency England to rescue a woman and her son from poverty. The lady in question is Juliana Arthur, the Viscountess Hawthorne, who was recently thrown out of her husband's estate with her young son. In true Viking style, Arik immediately takes charge to solve Juliana’s problems for her, all the while anticipating the great hereafter in Valhalla once this last mission for the gods is completed.

I listened to the Audible version of this book and narrator Brad Wills is simply outstanding. He accurately portrays Arik as a man who is no nonsense, rough around the edges, and a bit uncivilized due to being out of his time. For Julianna, Brad uses a breathy falsetto voice whose tone and manner is polished like you’d expect for a Viscountess. I received a copy of this audiobook in exchange for an honest and unbiased review. In summary, I recommend this audiobook to anyone who enjoys time travel Highlander/Viking stories.

Really enjoyed this book. Very entertaining, engaging and enjoyable. I love Historical as well as Time-Travel stories so this was a win-win for me. I have read several of Michelle Willingham's books before but this is the first book I have listened to. It was worth every minute. It's a well written and creative story pulls you in immediately and never lets go.

Is it worth you time and credit? That's a definite, Yes. Really looking forward to the next book in the series.

Really liked how the author handled the time-travel in the story. Intertwining the 2 characters of Arik/Eric was creative.

Brad Wills did a really good job with the narration. This is the first time I have listened to him narrate a book. Nice voice. Clearly spoken with a nice even pace. While his male character voices were great. The slight accent to Arik's character was perfect. The high pitch of the female voices took a while to get used to. Occasionally his female voices made me wince. Especially in the beginning. Grelard's(?) voice was great for an elderly woman as was Harry's for a child. He did bring the character's and story to life through his narration. Overall very enjoyable

Would you listen to A Viking for the Viscountess again? Why?

No, I have too many other books to listen to.

What other book might you compare A Viking for the Viscountess to and why?

One of Amanda Quick's books. The story drew on my emotions and also helped me learn about Regency England.

I loved the little boy and how Addrick interacted with him. I got this book via audiobook boom.

Great story, great narration! I loved listening to this. I was voluntarily provided this free review copy audiobook by the author, narrator, or publisher.

Trying not to reveal too many spoilers but, it is a good story of redemption & trust despite differences in time & culture. I do recommend it - the style is easy to follow & the master, Brad Wills, weaves his magic on the story narration too. A winner!!