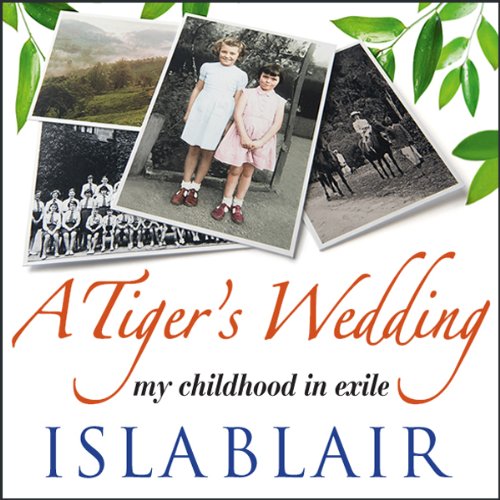 The actress Isla Blair’s extraordinary, moving and uplifting story of her childhood in India and her separation from her parents. Born in Bangalore India, during the fading days of the Raj, Isla grew up on a tea plantation managed by her father. She spent her early years in the lush, verdant hills of Kerala with her much loved older sister Fiona, secure in the love and affection of her parents and her adored “Ayah”.

This warm, spice-scented idyll was abruptly ended when, obliged by tradition and entirely believing they were doing the best for their daughters, her parents sent Isla and her sister “home” to boarding school. She was not quite six years old. But “home” was cold, gloomy, post-war austerity Scotland – a land of liberty bodices, chilblains, icy mornings and dank, drizzly days; an alien land where for several years she nursed an astonishing secret – of which only Fiona was aware. Isla Blair writes lyrically of her beloved India, stoically of term times in Spartan English boarding schools and holidays with grandparents and with great humour and vivacity of the time after school when she became one of the youngest students at RADA, training alongside Anthony Hopkins and others and throwing herself fully into life in London in the swinging ‘60s.

"This is a wonderful book, reminiscent of Rumer Godden; I couldn’t put it down. Isla Blair paints pictures with words and her scenes spring off the page like a film script. The agonies of a young girl turning into a woman have never been better done." (Joanna Lumley, OBE)
“There are wonderful things in this book. I loved the vivid picture of life on the tea plantations of the Raj, and felt the tears well as I read the account of being dumped back in Britain at the age of six. I was very moved, too, by the relationship that developed between Isla and her sister and astonished by the revelation of her secret.” (Michael Frayn)
"This is a true saga, a life’s journey of such compelling attraction. She very often moved me to tears and then her wit and sense of wicked fun restores the balance. She tells a wonderful story – so wonderfully.” (Sir Derek Jacobi, CBE)
“Actors’ autobiographies need to be more than just a meander through the curriculum vitae. Their work is ephemeral and descriptions of wonderful performances are never very engaging. They need a good story, set away from show-business. Isla Blair, in this regard, is fortunate to have had a miserable childhood. Many will be aware that she is a fine actress but it is not essential to know her work in order to appreciate her bookHer tale has a familiar ring to anyone who knows how British families working for the Empire used to organize themselves. Isla and her sister Fiona were raised in Kerala where their father was a tea planter. When Isla was four and Fiona eight they were sent to a boarding school in Scotland; they did not see their parents for another five years. The effect of this banishment has lived with Isla ever since: you get the feeling that only by writing this book has she finally come to terms with what happened. Yet, rather than a misery memoir, this is a mature dissection of colonial family life, laced with fascinating insights into a typical childhood of the time. The turbulence of life as a student actor and her early work are well drawn but this book remains primarily a family memoir – an account of her love for her parents, despite that deep sense of emotional abandonment in early life, and her compensatory adoration of her son and grandchildren.”(Robert Bathurst, The Tablet)

What listeners say about A Tiger's Wedding

Isla Blair's memoir is a beautifully read, and for the most part beautifully written book. It starts uncertainly, perhaps a little cliched in capturing British Raj life at the tail end of empire, but she quickly finds a voice and this listener was captivated thereafter (I listened in to it all in just two sessions).

She is less sure when relating her adult life (she admits to disliking the perjorative term "luvvie" but, just for a few short minutes, she does lapse in to this style) but her recollections of her childhood, which occupies the vast majority of the book feel very real and have enormous charm. I smiled and cried constantly.

This is finally an uplifting book and Isla Blair has much to say in her reflective passages that makes sense of both her's and the reader's lives. A great achievement which misses out on that fifth star, perhaps mean spiritedly by me, because of the very small lapse from the overwhelming good taste of the rest in to a little bit of "poor little rich girl". Don't let this put you off - you will be delighted that you gave this a listen.

I would recommend this book to anyone who enjoys reading about childhood and the past.

I love Isla Blair's voice. It is so smooth.

A childhood not forgotten ..

I like the book. Also finding out what a Tiger's Wedding actually means :-)

Isla Blair's voice is melodious and lovely to listen to, and of course her reading is professional - would that all performers had her talent and sheer level of literacy. Her story takes you back to a different world - the end of the colonial era in India and the post-war world in Britain mostly before the impact of the sixties. The only reason for not giving this 5 stars is that it struck me as just a little sugary at times.

Would you consider the audio edition of A Tiger's Wedding to be better than the print version?

aya walking the girls in the rain

kept my interest throughout

Beautifully drawn memoir of how love stretched across the years and across the world when she was sent from India to school in Britain. I loved hearing it read by Isla herself as you felt sure she was placing exactly the right emphasis and nuance on the story.