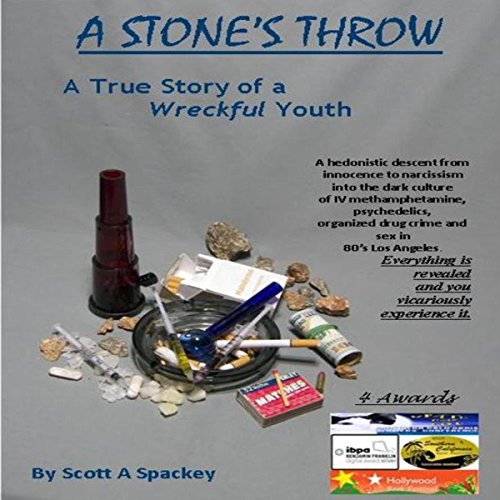 A Stone's Throw: The True Story of a Wreckful Youth

A hedonistic descent from innocence to narcissism into the dark culture of methamphetamine, psychedelics, organized crime, and sex in '80s Los Angeles. Pot and alcohol at 14, LSD by 15, and slamming dope by 17.

Intense, shocking, and brutal to the senses, A Stone's Throw teleports you on a journey he barely survived.

A sinister, secret society of sex, crime, and intense hybrids of narcotics mostly unknown to society.

Everything is revealed and you vicariously experience it.

As outrageous and surreal as Scott's story is, it is all true. A Stone's Throw is a journey the listener experiences. A young 13-year-old boy is moved from a calm suburban life to a chaotic existence in Los Angeles. We follow the subtle progression of partying indulgences of youth as it digresses into a dark and twisted life of survival, seduction, excess, and drugs that are part of a secret cult existence of crime, drugs, and sex. Scott's life devolves from its once youthful and normal innocence to tragic loss of character and spirit as he and his high school friends become some of Los Angeles' most notorious counterfeiters and drug dealers enslaved by exotic drugs few people know about to this day. The climax of his memoir is a terrifying, suspenseful event that escalates on a trajectory with one of two outcomes: total self annihilation and death or profound and enlightening salvation.

What listeners say about A Stone's Throw: The True Story of a Wreckful Youth