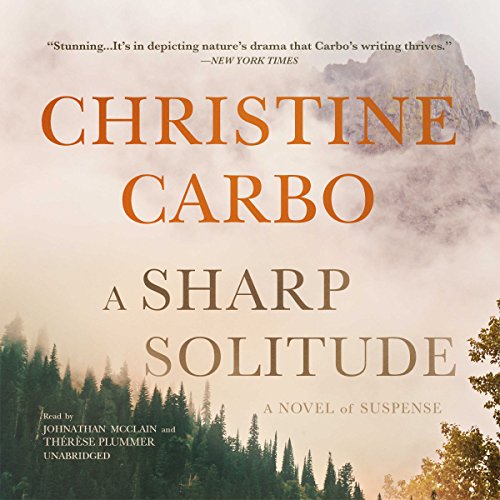 By: Christine Carbo
Narrated by: Johnathan McClain,Therese Plummer
Try for $0.00

A gripping new mystery from the author of The Wild Inside, set in the magnificent and brutal terrain of Glacier National Park

In the darkening days of autumn, a murdered journalist's body is discovered in a remote region near the Canadian border. Before she was found, Anne Marie Johnson had been writing an article about a canine research program that uses trained dogs to track scientific data. She was last seen with a man named Reeve Landon, whose chocolate Lab was one of the subjects of the piece. Now he's the prime suspect.

Back in the FBI's regional office in Montana, investigator Ali Paige is not officially assigned to the case since the crime was committed outside federal land. But Landon happens to be an ex-boyfriend and the father of her child. He calls Ali for help while he is being questioning, but soon he goads her to find out what really happened to Anne Marie.

Intensely private and paranoid, Landon ventures deep into in the woods to avoid being arrested. But even as he evades the detectives, Landon secretly feels the whole thing is somehow deserved, a karmic punishment for the horrifying crime he committed as a young boy. As for Ali, she has only one objective in mind: to save her daughter from the pain of abandonment she endured as a child.

As the clock ticks and the noose tightens around Landon's neck, Ali isn't sure how far she will go to find out the truth. And what if truth is not something she wants to know?

What listeners say about A Sharp Solitude

The gun described was a Winchester lever action 30-30. it does not have a safety as the hammer must be cocked for it to fire. Once fired the lever must be worked befor it can be fired again. I am all for gun safety and child protection but get your facts right.

Best Carbo so far. I will definitely get the next one.
Pros: interesting character development; I liked the alternating chapters ie Ali and Reeve.
Both narrators were pretty good at speaking as the "opposite sex". I think it's harder for a female narrator to "speak like a man" ie assume a lower register, and I appreciated the male narrator not relying on falsettos when portraying the voice of a woman. The relationship between Reeve and the reporter was extraordinarily described and from a man's POV, hard for ME to describe, just that it was so subtle and none of this "me Tarzan you Jane " supposedly intimate baloney some authors come up with. It was exquisite, the whole relationship from woods time to the (yes or no) seduction. (No spoilers).
Carbo inserts a lot of environmental background into her novels, (welcomed!) yet what I call the "wolverine one" was so far overdone with bartenders and drifters sounding like they had inhaled Sierra Club wolverine data. Not so in this novel. She used the persona of a woman reporter regarding environmental topics and a surprisingly well-balanced discussion of gun topics. The author has toned down the comparisons that she used to overdo, the only one that baffled me in this novel was "The lake looked like teflon". Huh? Like a teflon frying pan, which is the only thing I could think of? Comparisons like this cause the reader to blurt out "say what???" Completely breaking the "escape" a remarkable book provides. Some authors like Burke have carried these (similes?) to a ridiculous level....the sun was like....the sunset was like.. Carbo's extensive vocabulary serves that purpose perfectly, there is no need for "the sunset looked like molten lava" ie from the most recent Burke novels.
Cons: I had to roll my eyes at (a little) at the outcome of the long hike. I hate spoilers, so I will just say.......hmmm. Another "con" is that no wildlife biologist I know of would reward play time to their dog in the thick of the woods in a national park, full of alder patches, etc, but throwing a ball far out into the brush for the dog to charge after at full speed. And this, while collecting samples of fresh bear and other mammal scat. Just something I have never run across in years of living in the bush. Dogs shouldn't be trained to run full blast into the wild woods....obvious, I think. In fact, if a park ranger saw a hiker throwing a ball as hard as he could into the alder patches and thick woods in a national park it would probably result in a fine and a ticket. I saw this "boisterous dog in the woods" theme as a means of creating suspense, yes, it worked, but was "not fair".

I really enjoyed the three previous books by Christine Carbo. I gave 5 stars to each. The prior titles provided excellent suspense and the author conveyed the beauty and wonder of Glacier Park. I returned ``Sharp Solitude'' to Audible because both readers were terrible....Neither reader portrayed any drama in their sing/song voices. Both sounded like whining teenagers and not the FBI agent and ``outdoorsman'' that they were hired to portray.. The first three books in the series were read by R.C. Bray and Sarah Mollo-Christensen and their readings were excellent. I know that if this audio series continues with McClain and/or Plummer, I won't buy that edition.
-------------------------------------
Spoiler Alert: I did purchase the trade paperback through Amazon and will continue to read the published edition. Although at this point the FBI character doesn't seem realistic when she does not tell (order?) her ``friend" to hire a lawyer after he has been questioned by the police and he lied to them. Instead the FBI agent thinks about how she can help him personally. I was in law enforcement for 20 years and the best (and only) advice I would give someone in that situation is to get legal representation and then go back to the police and tell the whole story a/s/a/p.

This is a really good story with an amazing setting in Glacier Park. The author does an amazing job at creating well thought out characters that are believable and real.

female narrator did not enhance the story

I have enjoyed Christine Carbo's previous audiobooks but did not enjoy the female narrator in this one. Her voice & tone detracted from story and was not a good fit for the character. She was not believable in creating the seriousness of the situations or the fact that she was supposed to be an FBI agent.

The premise was interesting, But the cop/agent who is self-destructive beyond all understanding is overused and stupid. Jonathan McClain way overdid the gravelly voice thing and it was just incredibly annoying. I felt like I had to finish it to see how it ended and I wish I could get those hours back to listen to a better book. I can't understand how it got 4.4 stars. Some of the dialogue was just mind-blowingly bad. spoiler alert: she now knows that the killer has been her nanny for years and yet she "knows Rose better than anybody". Really? And how does losing your job and livelihood because you break all the rules and betray your partner protect your daughter? Really, really bad. Can't believe there's a Book 2.

Apparently, there are three other books by this writer that are excellent but I'm hard-pressed to believe that based on what I was able to get through of this ridiculous story. The main character does not behave like an FBI agent and the liberal anti-gun ranting stopped me a chapter 17. The narration was off, as well. I'm glad this one was free.

I was excited to read this book but it ended up being a slow, drawn out bore.

Narration is so important.

I am a pretty seasoned Audiobook listener and Christine Carbo is an awesome writer, but the narration of this book made it feel as if the writing was sub par. same thing as an actor making a movie scene believable or not. still a pretty good listen but an RC Bray performance would have made all the difference.

Unfortunately a anti 2A work. 2nd/578 not finished

2nd out of 578 books in my Library I didn't finish.
The first three books in the series with great. I enjoyed the storylines, character development, and the way Christine writes the scenes. But this is just a anti-gun work of fiction.

Best in the series. A great story and I thoroughly enjoyed it. You won’t be disappointed in this one.