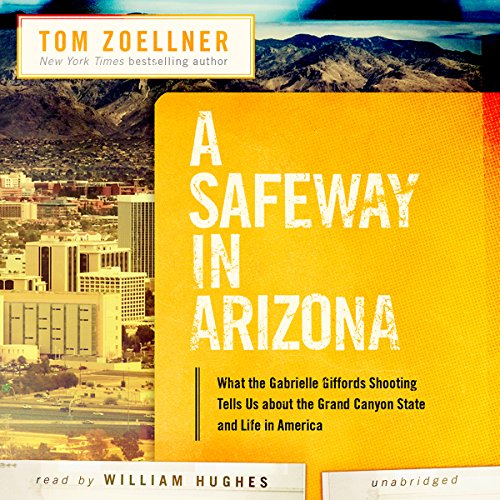 A Safeway in Arizona

What the Gabrielle Giffords Shooting Tells Us about the Grand Canyon State and Life in America
By: Tom Zoellner
Narrated by: William Hughes
Length: 10 hrs and 9 mins
Categories: Nonfiction, Politics
4.5 out of 5 stars 4.5 (8 ratings)

A Safeway in Arizona

A riveting account of the state of Arizona, seen through the lens of the Tucson shootings.

On January 8, 2011, twenty-two-year-old Jared Lee Loughner opened fire at a Tucson meet and greet held by US representative Gabrielle Giffords. The incident left six people dead and thirteen injured, including Giffords, whom he shot in the head.

Award-winning author and fifth-generation Arizonan Tom Zoellner, a longtime friend of Giffords’ and a field organizer on her congressional campaign, uses the tragedy as a jumping off point to expose the fault lines in Arizona’s political and socioeconomic landscape that allowed this to happen: the harmful political rhetoric, the inept state government, the lingering effects of the housing market’s boom and bust, the proliferation and accessibility of guns, the lack of established communities, and the hysteria surrounding issues of race and immigration.

Zoellner offers a revealing portrait of the southwestern state at a critical moment in history - and as a symbol of the nation’s discontents and uncertainties. Ultimately, it is his rallying cry for a saner, more civil way of life.

Tom Zoellner is the author of Uranium: War, Energy, and the Rock That Shaped the World, winner of the 2010 American Institute of Physics Science Writing Award; The Heartless Stone: A Journey through the World of Diamonds, Deceit, and Desire; and coauthor of the New York Times bestseller An Ordinary Man. He has worked as a reporter for the Arizona Republic and San Francisco Chronicle.

“This is a remarkable book. It was deeply reported before Tom Zoellner could have known he would write it. It was deeply reported after the shooting of Gabrielle Giffords made it absolutely necessary for him to write. Zoellner’s long, intense relationships with his two main subjects - Giffords and the state of Arizona - give enormous authority to his storytelling. Unsentimental but driven by powerful emotion, the book makes crisp, riveting, expansive sense of a tragedy that was far more than a random massacre by a madman.” (William Finnegan, author of Cold New World: Growing Up in a Harder Country)

Expected the interpretation of tha author to aggrevate me. Although it was clearly biased, it was well done.