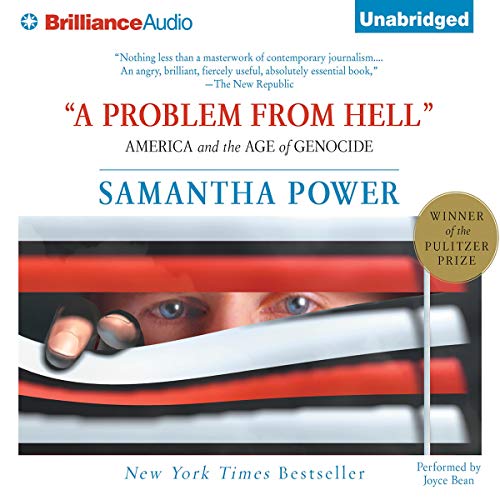 A Problem From Hell

By: Samantha Power
Narrated by: Joyce Bean
Try for $0.00

In her award-winning interrogation of the last century of American history, Samantha Power - a former Balkan war correspondent and founding executive director of Harvard’s Carr Center for Human Rights Policy - asks the haunting question: Why do American leaders who vow “never again” repeatedly fail to stop genocide? Drawing upon exclusive interviews with Washington’s top policy makers, access to newly declassified documents, and her own reporting from the modern killing fields, Power provides the answer in A Problem from Hell, a groundbreaking work that tells the stories of the courageous Americans who risked their careers and lives in an effort to get the United States to act.

What listeners say about A Problem From Hell

This book is good history in a way so few are. The stories are compelling not just for what they entail but the degree of frequency they show genocide to occur in merely the past century. And having been published before the tragedy of Darfur it shows we still haven't learned. Its great also for showing several heroes most people are likely not even aware of. Most prominnently William Proxmire, Senate successor of Joseph McCarthy. Amazing work. And I am rarely so powerfully surprised by history works anymore. A difficult topic. But worthy of everyone's attention and expertly handled by both author and narrator.

The problems that we turned away from

When I plan listening to audiobooks, I try to alternate the ones that I want to read (for fun and pleasure) and the ones that I need to read (for knowledge). This book definitely belongs to the latter group. Who wants to read about genocides? For 22 hours! But I am glad that I read it because the book gave me a good review of all the major genocides/atrocities in the 20th century. This makes me more responsible for my actions in the future problems, but I would rather know about these facts than remain ignorant. So, yes, I am glad that I read it.

The book mainly focuses on U.S. foreign policies (or lack of) about these genocides and how the politicians at the time acted. Naturally, politicians are reluctant to choose unpopular policies with unknown risks, especially when there are serious domestics problems. There are of course examples of failed foreign interventions. But, to me, the problem is that the people may not always be aware of what is going on in a remote places in the world (though this may be less of a problem now because of the Internet). Of course, people would demand better domestic economy and national security policies over foreign interventions. But at what cost? We as citizens need to be better educated about what goes on in other countries and demand any necessary intervention actions from politicians.

This was a difficult book to read emotionally. But this must have been a really difficult book to write. The book does amazing job of depicting facts and events as they were (well researched) with minimum emotional interpretations. I have tremendous respect for Samantha Power for this.

A dark lesson in dramatic irony

I'll start with what I liked about this book. The first part of this book where it tells the life story of Raphael Lemkin, a truly inspiring and heroic figure, was very good and I'm happy to have learned about him. The book's account of the Cambodian genocide was quite good as well, speaking as somebody who didn't know much about that particular conflict.

I had serious issues with much of the rest of this book, it's perspective on America's role in the world, and ultimately with the very unpleasant legacy of its author.

A major issue this book suffers from is its titular obsession with the American politics of foreign genocides. The worst of this plays out in the second half of the book, almost entirely devoted to crisis in the Balkans.

Going in I was hoping to get a better understanding of the Bosnian conflict, especially since as a journalist at this time the conflict was Power's focus. Unfortunately that's nearly impossible from this book, as every single attempt to explain the conflict in Bosnia is immediately derailed by a largely irrelevant Bob Woodward-esque report on what this congressman or that Clinton official said about the conflict in this or that meeting. It's clear Power's main resource was White House and congressional officials, so if you want quotes about the conflict from those people, this is a great resource. If you want a broader coherent overview of the conflict, this isn't your book.

The writing also suffers from Power's very transparent facade of objectivity. While she rarely says outright that military intervention is the best way for America to address genocides, its heavily implied in nearly every passage. Her heroes in Washington deliberations are the people pushing for intervention, the villains are the cowards who oppose it. While most experts in genocide studies caution that military intervention should be an absolute last resort in genocide prevention, such ideas are given almost no consideration.

This plays out most clearly in the case of Iraq. The book goes at great length to advocate for proponents of sanctions against Iraq in response to the genocide of the Kurds. What the book does not mention is that the sanctions were implemented after the conflict in Kuwait, which led to two successive UN officials resigning in protest, calling the sanctions themselves genocidal.

The darkest aspect of this book though is probably Power's later career. She went on to join the Obama Administration's National Security Council where she advocated for the American intervention in Libya, now a failed state with reported open-air slave markets. In Obama's second term she became the US diplomat to the UN. When civil war broke out in Yemen she gave American support for sanctions against Houthi-controlled regions of the country. This was subsequently used as cover for a Saudi-American blockade on Yemen, a country dependent on 90% of its food from outside sources. A mass famine and cholera epidemic broke out as a result, which meets the UN criteria for a genocide and continues to this day. It's a particularly strange twist of fate that the author of a critically-acclaimed book about genocide prevention went on to herself be instrumental in a genocide, but to quote a much better book, it's "the lesson of the fearsome, word-and-thought-defying banality of evil."

This is the essential text on American Moral Abdication, performed expertly by a narrator who can convey so much in understatement, and summon conviction when needed.

Geez, depressing reading how often the story repeats itself. Also depressing thinking about society’s response in the actual event’s time periods. however based on my own response to some of these atrocities at the time, the countries apathetic response isn’t necessarily intentional. While it’s sad seeing how this repeatedly unfolds I think it’s important to acknowledge and hopefully learn from.

Out of the Darkness

Yes, it was a struggle to finish because I, too, am a survivor of our Tolowa Dee-ni' Holocaust of 1853-1856 here at the California and Oregon stateline along the coast of the Pacific Ocean. Our tribal population was reduced from over 10,000 to a mere 121 in California and 383 in Oregon in the 1910 census. And now, I know why I've been the one deemed as an "unreasonable" activist of human rights my entire life! Samantha, shu' 'aa-shii-nin-la (thank-you-so-very-much) for writing this book to me to better advocate for myself and all humans suffering and have suffered from the atrocities of Genocide. Hee...(amen).

history lessons to learn not repeat

worthy topic and thorough work by the audit author. listen then send it to your friends.

A thorough, compassionate review of US policy on genocide

Power analyzes US government policy on mass atrocities by diving into the Armenian genocide by the Turkish, the Jewish Holocaust, the Khmer Rouge mass killings in Cambodia, the Iraqi gassing of the Kurds, the Rwandan genocide, and the Serbian systematic killings in the Balkans (Bosnia and Kosovo). She demonstrates how inaction by the US cuts deep and has a profound negative effect on world peace. This book is not a boots on the ground of each mass atrocity, rather a look at each deadly stage in history through the eyes of failing, repetitive US foreign policy. This book is extremely important and informs us on how to acknowledge and deal with genocides before they even happen.

This should be required reading in schools. It is unbelievable (and inexecrable) what we are able in our insulated world to remain blind to. Absolutely excellent book. I've ordered the paper copy also to get a better bead on the dates.

I cannot improve on this previous review with minor editing.
The challenge is to make genocide real. This work is a significant contribution and deserves a broader reading. Ultimately it is hard to see how things can change when the political costs are low for ignoring genocide and high for intervening.
- Siddharth Mohandas, The American Prospect
Besides, we should be mindful of her recent performance as UN ambassador under Obama being an example of good intentions having unintended consequences.
It is somewhat difficult for me to understand how it won a Pulitzer.