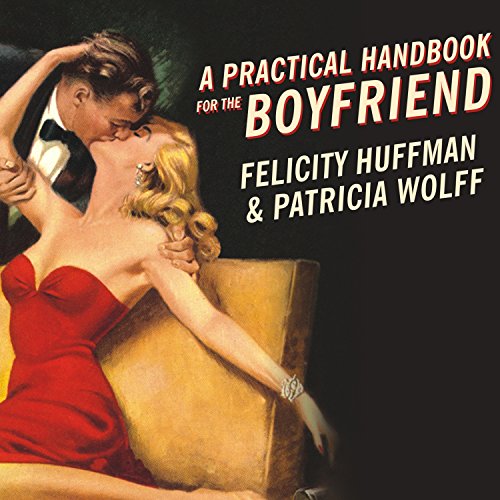 A Practical Handbook for the Boyfriend

A Practical Handbook for the Boyfriend

Most dating books are written for women - what a mistake that is. Women know how to date....It's men who need the help! At last: a blithe, bold, and bawdy guide to building a better boyfriend.

At some point, every guy (player, geek, mama's boy, "regular Joe") meets a woman who makes him want to be a boyfriend. A good boyfriend. Problem is, unless he's had some first-rate training (by a previous girlfriend, a sister, a mom), he probably doesn't even know what that means. Felicity Huffman and Patricia Wolff come to the rescue with a rollicking and whip-smart handbook to navigating the minefield of male-female relationships.

Directed at men (though of course it's women who'll download it, then leave it on their boyfriend's listening device, accidentally on purpose), A Practical Handbook for the Boyfriend lays out the manly steps involved in becoming a good boyfriend, while still maintaining guy-dignity. It covers issue like:

Filled with humor, ribaldry, common sense, and assorted outdoor skills, A Practical Handbook for the Boyfriend is the next dating guide to dominate the best-seller lists.

I couldn't stop laughing throughout this book. I listened to it while riding the metro to and from work -- I'm sure my fellow passengers thought I was nuts. The narrator, Shelly Frasier, does a superb job. It doesn't sound as though she is narrating -- it sounds as thought she is speaking to you, coaching you. Most of the advice is common sense -- but since when is common sense common?

I wish the book were longer. As the title indicates, it is mostly about established relationships, how to improve them, how to accommodate -- but not understand -- the GF's (Girl Friend) irrational behavior (understanding is genetically impossible) and how to breakup. The authors seem to address most cases where the GF is fully committed to a relationship. I'd like to have read/heard more about how to approach woman and how to develop their interest. I believe that most women are not as appreciative of good manners as the authors claim.

Regardless, the book is insightful, well written, superbly narrated, and well worth the time and energy to listen.

not bad, not great

cliff notes for mars and venus with a few jokes. not bad, but if you are looking for serious advice it's not great either.

Why guilty?... Well, because I laughed a lot, knowing I shouldn't have. In this book all men are 9 y/o (mental age) pushing 16 (sexual age). It is cheap anti-male humor... but somehow it works (Yes, I am a woman.) However, most of the time it is patronizing to men. And as one reviewer remarked, the men the author addresses would never read that book. Not without a serious incentive or a gun to their heads. That is why the jokes are cheap. But the book is light, well written, witty, and perfectly narrated. Dear male fellow reader, if the famous Katz's scene in When Harry Met Sally hit you in the manhood, stay away from that book.

Both sexes play goofy games. These gals show you how to recognize and deal with the rediculous games we play.

First, the tone is upbeat, funny. I listen to this before I go to bed.
Not condecending, that is others going "Aw, the truth hurts" Hey if you want a great relationship, think like her !

Second, informative, even at my age, I still need to remember my mistakes, as I listen. Take the hit and just go "Yes, I could improve"
Third, this should be mandatory for all High School Grads. If people would learn this, how many relationships would turn into 40 year marriages.

Overall, a very positive read (ok, Itune Audio Book) and I would recommend it to anyone who is dating and has that GF.

This book was better than I expected. It is so cleverly written, so concise. Everything may not be applicable personally, which is fine. And some things you may have heard before - which is actually great because most of us guys (and girls) need to hear it again and again. The man-woman thing is so wonderful, but so ridiculously hard to make sense of. While we don't have to make sense of it, it is very helpful to better understand our roles, to catch a glimpse of how the opposite sex sees things so insanely differently, to get a better idea of what actually works. This book does that.

The book could be beneficial for established relationships, but its also great for those thinking about getting into one. It portrays so many great examples of real relationship life &#8211; things that are easy to forget when dreaming about your wonderful girl. The book spells them out, but more importantly for me, it made me feel what those problematic moments are like; it put me in them so that I can prepare myself not just mentally, but more holistically. Its not just great information, but I actually feel changed, knowing that I can handle relationships much better than I would if I had not listened to this book. Of course I'll probably have to listen to it again and again, but at least it is something that I would want to listen to again and again.

With regards to the narration, I wasn't so sure about it for the first minute or so. But then I realized how well it works with the quick, witty, and colorful writing style. She has a clear, warm, down-to-earth voice and she doesn't miss a beat. Her delivery is also subtle and dry, held more in her throat it seems, so that when she reads the many crazy, funny things, she is able to underplay them, contrasting with the writing and making the book come across (as I am sure it is meant to) in a wonderfully humorous way. The authors must be very pleased. I know I am.

Written for Women to Enjoy

While the author tries to connect with guys by throwing in references to Star Trek or Power tools, everything comes across as patronizing. The entire book reads as condescending towards guys, and the overall theme is "girls are crazy, get over it and listen to everything they tell you to do, if you wanna get sex." Probably funny to women, but is kinda insulting to males. The men she describes in this book are the kind who will never read/listen to this type of book, so what's the point?

If you follow the advise in this book you are a naive superficial little man!!

Great material for any straight guy, married or single.