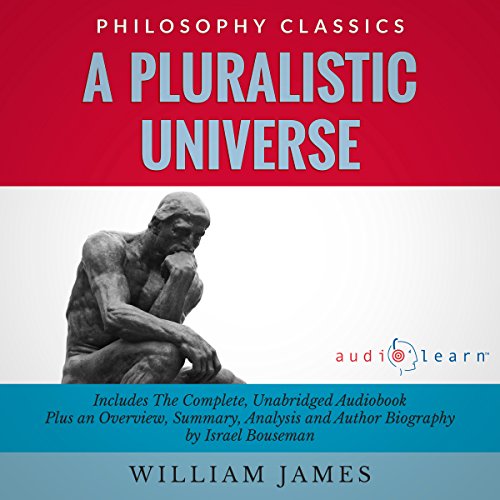 A Pluralistic Universe by William James

The Pluralistic Universe is a product of the mind of William James, thought to be one of the most influential thinkers of the early 19th century. James was known as the father of American psychology and the founder of the school of radical empiricism. The Pluralistic Universe is a collection of lectures that James gave at Oxford University between 1908 and 1909. They contain the earliest expression of some of his most profound metaphysical thoughts.

James has an unorthodox approach to philosophy. He critically reviews the accepted perspective of classic philosophers from Plato to Kant, highlighting the inconsistencies in their work and providing a compelling alternative to their conclusions. This is the work of the philosopher's philosopher, a man who had the insight to pierce the veil of dogma and cut through the academic language that separates philosophy from the language of life. The Pluralistic Universe is a must-hear for students of philosophy and for anyone interested in the nature of thought and existence.

What listeners say about A Pluralistic Universe by William James