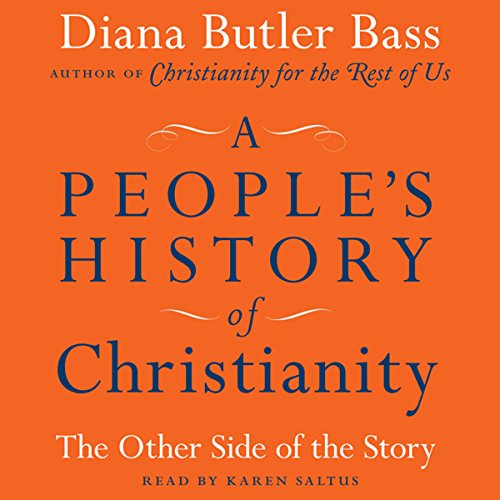 A People's History of Christianity

By: Diana Butler Bass
Narrated by: Karen Saltus
Try for $0.00

For too long, the history of Christianity has been told as the triumph of orthodox doctrine imposed through power and hierarchy. In A People's History of Christianity, historian and religion expert Diana Butler Bass reveals an alternate history that includes a deep social ethic and far-reaching inclusivity: "the other side of the story" is not a modern phenomenon, but has always been practiced within the church. Butler Bass persuasively argues that corrective - even subversive - beliefs and practices have always been hallmarks of Christianity and are necessary to nourish communities of faith.

In the same spirit as Howard Zinn's groundbreaking work The People's History of the United States, Butler Bass's A People's History of Christianity brings to life the movements, personalities, and spiritual disciplines that have always informed and ignited Christian worship and social activism.

A People's History of Christianity authenticates the vital, emerging Christian movements of our time, providing the historical evidence that celebrates these movements as thoroughly Christian and faithful to the mission and message of Jesus.

What listeners say about A People's History of Christianity

Wow. Let me just say first the Ms. Saltus is an extremely talented voice over artist. She has the most articulate voice I think I've ever heard. And that's the problem for me with her narration of this book . . . she sounds exactly like a machine. It's uncanny. Her voice and articulation sound better than what's on my GPS or even Siri on my iPhone.I'm afraid I can't stand to listen to such a mechanical sounding voice, as technically good as it is, for a book reading. For me, the choice of narrator has completely ruined this audio book experience.The voice is completely detached from the narrative and it sounds artificial with no emotional connection at all to the text.In my opinion, the experience of listening to a book is much more than just hearing a technically consistent and accurate voice reading words . . . it's should be a performance with authentic emotional engagement that connects with the listener and strengthens the narrative.

What made the experience of listening to A People's History of Christianity the most enjoyable?

The well-written and well-researched text.

Who would you have cast as narrator instead of Karen Saltus?

Anyone who understood basic pronunciation of religious terminology and important religious figures. Some basic words, like "theologian" were consistently mispronounced.

a bit too long for that, but I returned to it over a few days to finish.

To honor the scholarship of the text and to maintain credibility, the pronunciation of the reader/performer needs to be monitored. She has a beautiful voice, clearly talented, but needs help with pronunciation of religious terminology.

Struggled to continue 😴. I stopped listening after chapter 3 as I was looking for Christian history and not what was missing in the church.

I've never been so disappointed in a book

The chapter breakouts were very interesting. For example, I was so excited to listen to the early Christian history, 0-500 AD. However, the narrative skipped all over the place and didn't pay any attention to telling a good story. I am a Howard Zinn fan, and this book has no relationship to his work, despite the title.