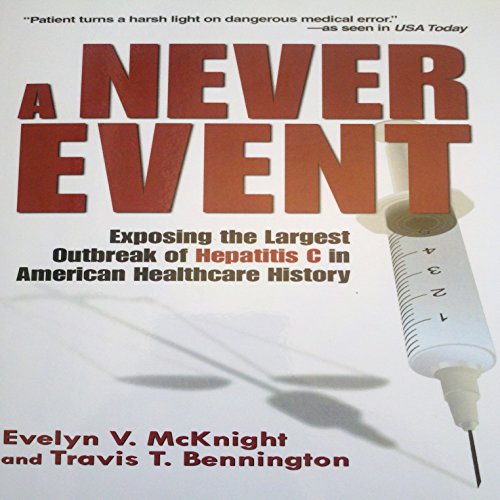 In the small, farming community of Fremont, Nebraska, townspeople eagerly welcomed an acclaimed doctor as the first full-time oncologist at the new, local cancer treatment center. But the fanfare soon turned into a nightmare. During chemotherapy treatments, 857 patients who were already waging the fights of their lives against cancer were inexplicably exposed to the deadly, blood-borne hepatitis C virus. At least ninety-nine of them contracted the lethal illness. The horror was unprecedented as this was the largest healthcare-transmitted outbreak of hepatitis C in American history, and remains so to this date.

A Never Event - a term used to describe a preventable medical tragedy - is a searing account of the health challenges these patients encountered and their quest for justice, as well as the painstaking investigation to uncover the source of the outbreak. It s a story of recklessness, deception and betrayal by the person these patients should have been able to trust the most: their physician, a man who, when the outbreak was discovered, fled the US for his native country in the Middle East. Written by a survivor of the tragedy and an attorney who represented many of the victims, A Never Event is a wake-up call to medical and legal communities nationwide.

I enjoyed the story due to it's subject matter, and the fact that it occurred near my home & I'd never heard of it. The authors address how the media stayed away from this story. The reader was somewhat robotic, and I ended up speeding up the narration a bit. The last half of the book was pretty legal, which was hard for me to get through, but it was part of the story & remained interesting. I just don't have a legal mind. Those that do will enjoy the legal side of the story, too.

I remember when this happened, but didn't realize how absolutely malignant this doctor was. The lives he ruined are unforgivable.
The ability of other doctors, administrative personnel, and professionals to turn a blind eye is sickening. Not wanting to get involved prolonged this tragedy.
Lawyers get a bad name often, but if EVER there was a time for good lawyers to get involved to help these people, this was the case. Well done!
This book is well written, and narrator is good, but I did increase ipod to 1.5 speed.
I believe this book will stick in my mind for a very long time.