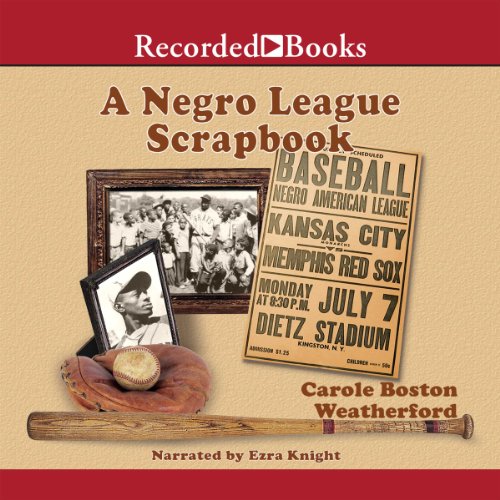 By: Carole Weatherford
Narrated by: Ezra Knight
Try for $0.00

Negro league baseball players didn’t always get the respect that major leaguers received. And yet many - including Jackie Robinson, Willie Mays, Hank Aaron, Ernie Banks, and Roy Campanella - quickly became standouts in the major leagues after 1947. Others didn’t get to prove their mettle in the majors at all - or not until long past their prime. Leroy “Satchel” Paige mixed his blazing fastball with 29 other devastating pitches to win 42 games and strike out 402 batters in 1936. Credited with 175 stolen bases in one year, speedster James “Cool Papa” Bell delighted fans by scoring from first base on a bunt. And powered by steroid-free meals, Josh Gibson hit 75 homeruns in 1931 - with one blast sailing 580 feet and another shattering a seat in Yankee Stadium. New York Times best-selling author Carole Boston Weatherford compiles an enthralling summary of Negro league history that includes fascinating tidbits about prominent pitchers, hitters, utility players, teams, and traditions.

“An engaging overview … especially successful in conveying the significance of the Negro leagues to the black community and in detailing the realities of segregation.”—Library Journal “[This] is a thorough picture of the Negro leagues in all their sadness, pain, and glory. One doesn’t need to be a baseball fan to be fascinated.”—Kirkus Reviews “A lively presentation—give it credit for at least a triple.”—Booklist

What listeners say about A Negro League Scrapbook