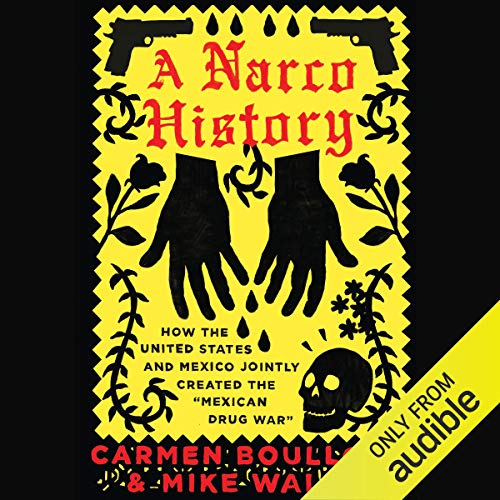 By: Carmen Boullosa,Mike Wallace
Narrated by: James Conlan
Try for $0.00

The term Mexican Drug War misleads. It implies that the ongoing bloodbath, which has now killed well over 100,000 people, is an internal Mexican affair. But this diverts attention from the US role in creating and sustaining the carnage. It's not just that Americans buy drugs from and sell weapons to Mexico's murderous cartels. It's that ever since the US prohibited the use and sale of drugs in the early 1900s, it has pressured Mexico into acting as its border enforcer - with increasingly deadly consequences. Mexico was not a helpless victim. Powerful forces within the country profited hugely from supplying Americans with what their government forbade them. But the policies that spawned the drug war have proved disastrous for both countries. Written by two award-winning authors, one American and the other Mexican, A Narco History reviews the interlocking 20th-century histories that produced this 21st-century calamity and proposes how to end it.

What listeners say about A Narco History

The book makes reference to a lot of names of people, places, institutions, and events in Spanish with terrible pronunciation by the narrator which makes it unnecessarily confusing to the listener. Either the narrator needs better coaching or new narrators who are bilingual need to step forward.

This should be standard reading for anyone who is interested in the history of the Mexican drug problem. They often quote from Ioan Grillo's El Narco - also obligatory reading if this is your interest. My only criticism is that the narrator clearly cannot pronounce the Mexican Spanish words properly and sounds more like a CNN transatlantic announcer.

Lost me half way

the author loses credibility when he is so left leaning he never mentions "fast and furious" even though he mentions the murder of the boarder patrol agent. he also touches on armed civilians doing more to stop corrupt government and cartels. then continues to blame American laws that provide this protection as an evil.

The historical view point taken by the author was interesting and lined up the facts in another book I read about the history of the war on drugs. the main characters of in this book lined up with the characters in the other book. the underlining theme of both books support the fact that the war on drugs was created by the same country aiming to stop it. Good listen, will get the hard copy for future research.

I love how the author maintained a non-bias factual sheet. Well knowledgeable, and great details on the series of events on the Cartel Drugs War.
This book should be listened by Americans and also Mexicans seeking a wider understanding and background of Politics, Corruption, US drug involvement and the origin of Cartels.

2021 Record Mexican Homicide rate and no one gives a hot.
This is such a sad story. I hope Americans will ne moved to question the neo liberalism that runs America, it is dismantling Mexico.

This was a great experience. really appreciated that they went in depth with Mexican history I feel that the extra perspective really helped flesh out the focus on the modern aspects of the drug war. I also really appreciated the fact that they mentioned the ridiculousness of calling it the "Mexican drug war" and added the US.

This is a great, albeit brief, history of the Mexican war on drugs. Detailed through the political climate in Mexico and US influence on Mexico, it tells the story of why and how. But I do recommend that the reader or listener have some background information on the Marco situation in Mexico as a lot of names and dates are thrown around and can be confusing.

Comprehensive view of an important topic

This book covers a lot of history and gives the reader a valuable single source for an overview of the current drug war and all its dire ramifications. While the performance is clear and professional there is the occasional mispronunciation of the Spanish names although I found it easily forgivable. Written some time ago now so the material is starting to show it’s age relative to the current state of affairs but nonetheless this book will get you up to speed on the drug war in an engaging manner.

This audiobook is a bit 'academic paper' in tone sometimes and the narrator isn't amazing, but it's fascinating and well researched, if very bleak. The total failure of the 'war on drugs' and it's dire consequences laid bare.