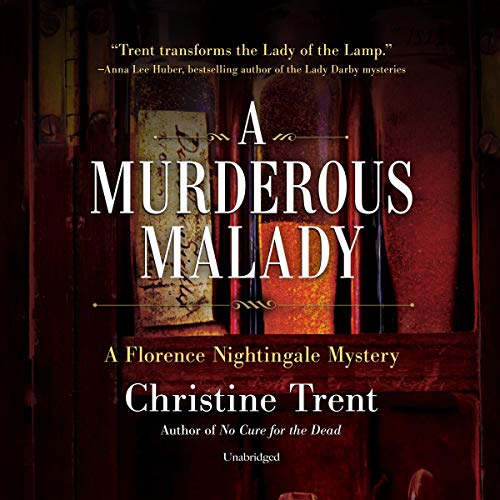 By: Christine Trent
Narrated by: Lucy Rayner
Try for $0.00

Cholera has broken out in London, but Florence Nightingale has bigger problems when people begin dying of a far more intentional cause - murder.

The London summer of 1854 is drawing to a close when a deadly outbreak of cholera grips the city. Florence Nightingale is back on the scene marshaling her nurses to help treat countless suffering patients at Middlesex Hospital as the disease tears through the Soho slums. But beyond the dangers of the disease, something even more evil is seeping through the ailing streets of London.

It begins with an attack on the carriage of Florence's friend, Elizabeth Herbert, wife of Secretary at War Sidney Herbert. Elizabeth survives, but her coachman does not. Within hours, Sidney's valet stumbles into the hospital, mutters a few cryptic words about the attack, and promptly dies from cholera. Sidney, frantic that an assassin is stalking his wife, enlists Florence's help, who accepts but has little to go on except for the valet's last words and a curious set of dice in his jacket pocket. Soon, the suspects are piling up faster than cholera victims, as there seems to be no end to the number of people who bear a grudge against the Herbert household.

Now, Florence is in a race against time - not only to save the victims of a lethal disease but to foil a murderer with a disturbingly sinister goal.

What listeners say about A Murderous Malady

I was pleasantly surprised that this book held my integrates more than book#1. I'm sad to learn that Book#3 is not Coming Soon...

This book isn’t everyone possible interest. However I am a nurse and I liked the way the author portrayed the character as being intelligent and a scientific thinker. I really liked the fact that the author made a great effort to assure that the reader ended the book with a proper understanding to the history of the times and to make it clear where she had stretched the accuracy of events to suit the telling of the story. I will look forward to listening to future novels in this series.

Trent accomplishes putting the reader in the in the midst of Nightingale’s scene and society without stretching the bounds of credulity. No jarring time bending even as she brings events closer to carry her plot forward. In all a very fine read.

Nursing, Cholera and a Race to Catch a Killer

The second in the series is perhaps even better than the first. It is rich with historical detail and urgency as cholera rapidly spreads over the Soho district. Florence is busy tending to patients, trying to clean up a hospital and attempting to catch a killer who attached her friend, Elizabeth Herbert's carriage on the way to town, killing one of her servants. Florence learns way more than she wants to know about her friend's father and husband while she is looking for the killer, who may have well been a foe of either of them, or of Elizabeth. As she searches for the culprit, she also learns much about the Afghan war, and the part that England played there, making Florence wonder if Liz's father, Lieutenant General Charles a'Court was the intended target. Or could it be Sidney, Liz's husband who was the current Secretary of War? The research on the cause and spread of cholera also peaked my interest. I wish there were more in the series to come. As Flo and her Mary Clarke, who served as Flo's secretary and close friend, went everywhere to find answers, I worried they would get in so deep that they wouldn't get out. What a pair they made! Excellent story and an ending well worth the wait.

Couldn't get very far into the story. One of the worst readers I've heard.

Loved the narration and really enjoyed the information in the Epilogue. It ties the whole historical thread. Thank you!

Happy the 2nd book was as good as the first

This second story in the series was well worth the listen. I really appreciated the author's historical notes at the end.

This book kept me keenly interested - not edge of my seat suspense but just a really interesting story of well-cast believable characters about life events and human feelings and behaviors during war. It wasn't gory but neither was it wimpy. It seemed to be amazingly well-researched and was greatly satisfying historically. I haven't done my own research to confirm this but it rang so true. I did at least do a Wikipedia check on Nightingale and what little I read seems to confirm she was quite a spiky, adamant, forceful character who was, as the book indicates, sometimes high-handed and abrasive -- how else could a woman of those times (or these) go so hard against the social grain and accomplish what she did?! This was all partnered with great compassion. I was only a little disappointed with the slightly dud of an ending - - but this wasn't a detective novel ! ;) so - - I think I shouldn't ding the book for this reason. And the writing and flow were good too. A very good book.