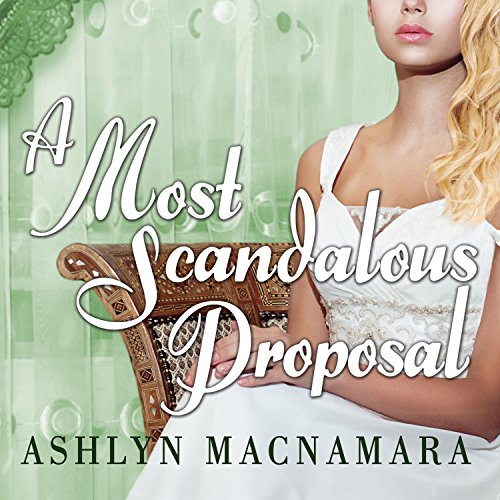 A Most Scandalous Proposal

By: Ashlyn Macnamara
Narrated by: Veida Dehmlow
Try for $0.00

After watching her beloved sister, Sophia, pine over the town's golden boy for years, Miss Julia St. Claire has forsworn love and put herself firmly on the shelf. Unfortunately, her social-climbing mother and debt-ridden father have other ideas, and they jump at the chance to marry Julia off to the newly named Earl of Clivesden...the man of Sophia's dreams.

Since resigning his cavalry commission, Benedict Revelstoke has spent his time in London avoiding the marriage mart. But when he discovers that the Earl of Clivesden has his sights set on Julia, Benedict tries to protect his childhood best friend from the man's advances - only to discover that more than friendship is driving his desire to defend her. He surprises them both with the force of his feelings. But when Julia refuses him, and her father announces her betrothal, Benedict fears he's lost her forever - until Julia approaches him with a shocking scheme that will ruin her for all respectable society and lead them into an exquisite world of forbidden pleasures.

What listeners say about A Most Scandalous Proposal

Entertaining but the last half better than the first

This was a really great book and I loved the voice used. Great characters and story.

I just loved this book. Two wonderful love stories, and niether took away from the other. Loved Julia and Sophia BUT who the heck EVER names the hero Rufus? OMG, that's just terrible and I'm so glad they called him Highgate most of the time. Loved Benedict too. Clivesden was just a creep and didn't get what he deserved, IMO.
I enjoyed it tremendously and would definitely recommend it.
The narrator did a good job too, not great but good. She could have made the men's voices a little deeper.