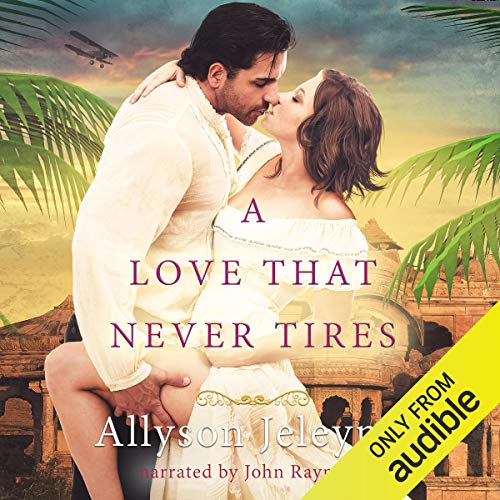 A Love That Never Tires

By: Allyson Jeleyne
Narrated by: John Rayment
Try for $0.00

Linley Talbot-Martin is a girl who likes to get her hands dirty. As the daughter of a famous archaeologist, she's been everywhere and seen everything--except London. But when the time comes to trade her jodhpurs and work boots for silk gowns and kid gloves, she may be in over her head.

Even though she can out-ride, out-shoot, and outsmart any girl in London society, Linley is destined to be the failure of the season. No one she meets cares about ancient pottery or lost Buddhist texts, and fundraising efforts for future expeditions keep coming up short. If the Talbot-Martin team doesn't find money soon, they will be out of a job, and Linley will lose everything she holds dear.

Patrick Wolford, Marquess of Kyre, is a man who knows his place. Well-connected and respected, he is everything everyone expects him to be, but beneath his façade, he is as neglected and crumbling as the family estate. Now the strain of keeping up appearances is taking its toll. The smart thing would be to marry the heiress nipping at his heels and be done with it, but when he meets Linley Talbot-Martin, who dares to shake up his seemingly proper world, he must choose between the life he's always known and one he never dared to dream of.

What listeners say about A Love That Never Tires

A Love that Never Tires

I was intrigued by the storyline immediately. I was a bit put off by the length of this book, until I used whispersync. The narrator made this story come alive and keep me on the edge of my seat. I highly recommend this book, because by the end, the characters had become my friends who allowed me to live vicariously through them.

I struggled at the beginning to get into the story and the characters but after a few chapters I settled in and couldn't wait to hear more. I gave it 4 stars overall and enjoyed the development of the characters & the narration enhanced the book very much. KUDOS all around!

See the World with Linley & Patrick!

Would you consider the audio edition of A Love That Never Tires to be better than the print version?

I didn't read the print, but I think John Rayment's lovely English accent enhances the story.

The heroine. She's independent without being annoying. It's hard to explain, but in Jeleyne's hands, things I've read in other romance novels seem fresh instead of clichéd.

The sexy parts. ;) But seriously, it was all enjoyable. Except for the race to save Linley's life, which was both awful and amazing.

He'll Go to the Ends of the Earth for Her...Literally!

...it is ok in a pinch, or if you were starving, but it isn't really what you want and it doesn't come close to the real thing. Not even John Rayment's wonderful narration could save this story. As the book opens, all is promising...exotic locales, a great introduction between the hero and heroine, great dialogue. It is just like frozen pizza...it smells great when you take it out of the oven, but then a few bites in, you realize it just isn't good. That is what happens with this book. The relationship between Patrick and Linley is frustrating. They flip flop back and forth on their feelings and intentions every few paragraphs. I do not need any wishy-washy leading men, thank you very much. By the time Patrick travels half way around the world to join Linley, she still doesn't know if he likes her. Really?

ALL of the secondary characters are horrible. Linley's father is completely selfish and self-absorbed. Their friends are antagonistic and mean. As the book goes on, it all becomes worse and worse.

Regarding the love scenes, I am no prude, but the author should refrain from ever writing another love scene. These were cringe-inducing and completely unrealistic. Linley almost dies and suddenly there is "pounding"? "Pounding" and "slamming" seem to be the only descriptive adjectives the author could think of. Yeah, not exactly romantic. And this is all because Patrick "can't control himself". At one point, in a moment of tenderness, Patrick assures Linley she can get an abortion if she needs to. All of this is insulting to the reader's intelligence.

Not your run of mill romance

Loved this listen!! Everything about it!!! All the different places and the visual you get is awesome!! Loved the characters. she is very quirky and not your ordinary lady! He was a straight arrow and she taught him what life was all about!!! Most remarkable book!!