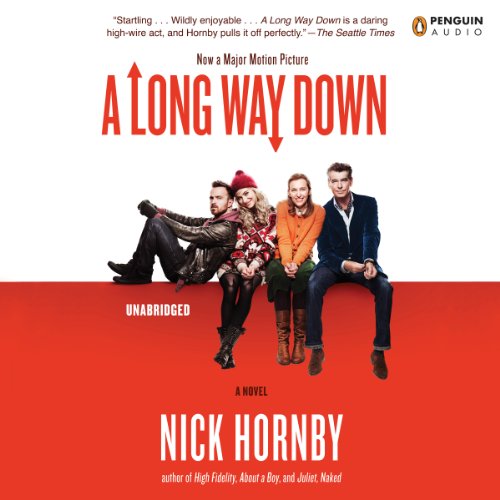 A Long Way Down

In his eagerly awaited fourth novel, New York Times best-selling author Nick Hornby mines the hearts and psyches of four lost souls who connect just when they've reached the end of the line.

Meet Martin, JJ, Jess, and Maureen. Four people who come together on New Year's Eve: a former TV talk show host, a musician, a teenage girl, and a mother. Three are British, one is American. They encounter one another on the roof of Topper's House, a London destination famous as the last stop for those ready to end their lives.

In four distinct and riveting first-person voices, Nick Hornby tells a story of four individuals confronting the limits of choice, circumstance, and their own mortality. This is a tale of connections made and missed, punishing regrets, and the grace of second chances.

Intense, hilarious, provocative, and moving, A Long Way Down is a novel about suicide that is, surprisingly, full of life.

"One New Year’s Eve, four people with very different reasons but a common purpose find their way to the top of a fifteen-story building in London. None of them has calculated that, on a date humans favor for acts of significance, in a place known as a local suicide-jumpers’ favorite, they might encounter company. A Long Way Down is the story of what happens next, and of what doesn’t." (The New York Times Book Review)

“It’s like The Breakfast Club rewritten by Beckett.... What makes the book work is Hornby’s refusal to give an inch to sentimentality or cheap inspirational guff." (Time)

What listeners say about A Long Way Down

Seems made for audio format

I thoroughly enjoyed this book, which is told first-person by four separate -- and extremely different -- characters. The narrator voices for each character really added to my enjoyment of the story. If you like language and the differences between American and British English, then you will enjoy this very funny yet poignant book. It got to a point where the words "Sorry Maureen" were enough to make me laugh.

One reviewer commented that s/he kept waiting for an epiphany and never found one. I have to disagree. Each character had several epiphanies throughout the story, but the author didn't hit us over the head with them. The changes and insights they experienced were subtle and very enjoyable to experience with them.

At one point in the book, one of the main characters starts a conversation with someone because he sees her reading Bel Canto (a real book by Ann Patchett). As I thought about it, there are many similarities between that book -- which I loved -- and this one. Both novels start with an unlikely grouping of characters who are confronted with a life-threatening situation and, over the course of the story, grow to understand and appreciate each other and the world they live in. Highly recommended, but it's more appropriate for fans of Jane Austen than Tom Clancy.

Nick Hornby has mastered the art of dialogue. You will not be let down by this book, the characters or their ideosyncrasies.

Even though I didnt want to leave the characters, in the end, I know that they will never leave me.

A great laugh of a book, 'what a laugh!' as the English love to say... yet really sad at the same time. When listening to it, you do find yourself laughing out loud quite a bit. But being someone with depressive tendencies of my own, I couldn't help feeling that overall this book did bring my mood down a bit.

The different voices/actors used for the different characters really make this a great audio listen. I think I would have preferred this book on audio, as opposed to reading it.

I never imagined that the topic of suicide could be so funny! Extremely well read. Especially recommended to anyone whose life hasn't quite turned out to be everything they'd hoped for.

I enjoyed this book and all of the personalities involved in the story. Nothing heavy, just plain, easy entertainment.

I fell right in synch with these quirky, odd characters. Not only were the characters well built, but the slang is just wonderful. I found myself pulling out these great odd phrases. It is difficult to listen to though for along period of time, as I tended to wander. I think it was the strong accents (which I also loved). So I gave it 4 stars.

I can't imagine reading this book now that I have listened to it with all of the wonderful narrators- a thoroughly enjoyable experience. The multi-voice recording really brought the story to life, not to mention the fact that the dialogue is great anyway. This is the first Hornby I have listened to or read, although I have seen several movies- I plan to get my hands on everything he's ever written!

I cannot give this book enough stars! Both the story and the performance were fan-BLOODY-tastic. I enjoyed the three different readers, playing the parts of the four characters. Kate Reading and Scott Brick are two of my favorite narrators and now I have another favorite - Simon Vance. Each of them brought so much to the reading. I don't feel as if they were actually reading it at all, but more like they were really Martin, JJ, Jess, and Maureen, speaking for themselves. This is the second novel by Nick Hornby that I have listened to (the first was "Juliet, Naked", another excellent listen) and I will be trying to locate more very soon.
This book though, really resonated with me. I am a parent of two children with special needs, though they are by no means as profoundly disabled as Matty is, and I found Maureen's story to be especially poignant; however, I was also able to relate to the other three characters (even Jess) almost as well. The characters are very human, very real, and more often than not, quite comical. I especially love the interactions between Martin and Jess. Martin is twice Jess's age and way higher on the IQ scale, but can never seem to come out on top of any arguments they have. One of my favorite quotes from this novel is from Jess when she says "everyone knows how to talk, but no one knows how to listen". I feel like that, too. Often. There were parts of this novel where I laughed out loud and then there were other bits that moved me to tears. I used the bookmarks feature on the Audible app (along with the ability to add a note) more on this than any other I've listened to. I know there were whole sections that I've only begun to really "get" so it'll definitely require another listen sometime in the future. I am recommending this book to family and friends, anyone I know who's life isn't what they'd expected and hasn't turned out quite in the way they'd hoped it would.

This books was fantastic! All the characters are likeable and funny; the narrators are perfect! I thoughly enjoyed this book!

Intelligent and funny, sad and true, intellectual and flippant, I still refer to ideas in it when talking to others about the tragedy of suicide.