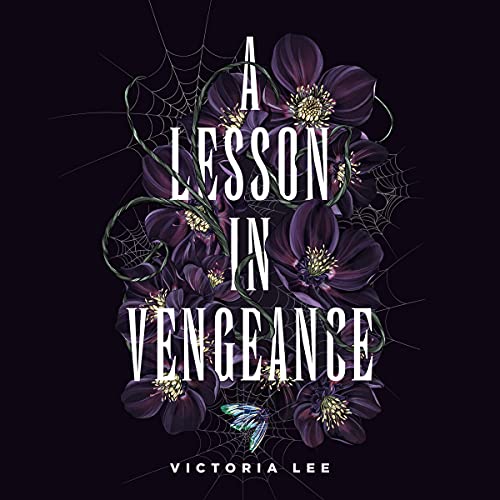 A Lesson in Vengeance

By: Victoria Lee
Narrated by: Lindsey Dorcus
Try for $0.00

A dark, twisty thriller about a centuries-old, ivy-covered boarding school haunted by its history of witchcraft and two girls dangerously close to digging up the past. The dangerous romance and atmospheric setting makes it a perfect read for fans of dark academia.

Felicity Morrow is back at the Dalloway School. Perched in the Catskill Mountains, the centuries-old, ivy-covered campus was home until the tragic death of her girlfriend. Now, after a year away, she's returned to finish high school. She even has her old room in Godwin House, the exclusive dormitory rumored to be haunted by the spirits of five Dalloway students - girls some say were witches. The Dalloway Five all died mysteriously, one after another, right on Godwin grounds.

Witchcraft is woven into Dalloway's past. The school doesn't talk about it, but the students do. In secret rooms and shadowy corners, girls convene. And before her girlfriend died, Felicity was drawn to the dark. She's determined to leave that behind now, but it's hard when Dalloway's occult history is everywhere. And when the new girl won't let her forget.

It's Ellis Haley's first year at Dalloway, and she has already amassed a loyal following. A prodigy novelist at 17, Ellis is a so-called method writer. She's eccentric and brilliant, and Felicity can't shake the pull she feels to her. So when Ellis asks Felicity to help her research the Dalloway Five for her second book, Felicity can't say no. Given her history with the arcane, Felicity is the perfect resource.

And when history begins to repeat itself, Felicity will have to face the darkness in Dalloway - and herself.

"A Lesson in Vengeance is at once dark and mesmerizing, with spine-tingling suspense and mind-bending twists. I loved it." (Kara Thomas, author of The Cheerleaders and That Weekend)

"A smart, layered, thought-provoking thriller about female desire and the intimacy of violence.” (Ava Reid, author of The Wolf and the Woodsman)

"Darkly radiant and brilliantly wicked, A Lesson in Vengeance is a sharp dissection of queerness, ambition, and the forbidden luster of the occult. This book will possess you from first pages to its haunting, final words.” (Ryan La Sala, author of Be Dazzled and Reverie)

Featured Article: Get Lost in the Drama and Intrigue of Dark Academia


Both an aesthetic and a subgenre of fiction, dark academia explores morally gray characters with impious or evil intentions set against the backdrop of beautiful, hallowed, and unsettling boarding schools and university campuses. The dark academia subgenre encompasses everything from murder mysteries to horror and fantasy, so there's a little something in it for everyone. From angst-filled fiction to brooding novels, we've rounded up the very best listens.

What listeners say about A Lesson in Vengeance

unsure how I feel about it

I struggled a bit until about 75% of the way through. The ending made it worth it. It was very dark for a YA novel. Overall I enjoyed it. I have mixed feelings about it being marketed to teenagers though. Think I'm going to read a Penelope Douglas book to chase away the edgy vibe this left behind. Can you tell I have mixed feelings? No regrets. Don't listen to this in the dark though.

I adored this book, I knew I loved it by chapter 2 and I had to finish it by the end of the day by chapter 8. Dead Poets Society meets The Craft, but seamless, immaculate, and completely original.

This book is such a refresher. It's thrilling and I can't explain how much my soul loved it. I don't think I'll ever stop thinking about this.

what did I just read??

what a well written story. I feel so awkward and unsure. great great arc. I knew their would be a twist I didn't know that as the reader the twist would be so macabre

An Interesting Study on Human Nature

This book was really fascinating. I was not really sure what to expect when I picked this up. It is safe to say, this was nothing like what I thought it was going to be.

This book was an exploration of human nature. Ellis was portrayed as a normal, adjusted kid. However, Felicity is portrayed as a crazy girl whose mind is barely holding on. In this book, no one is who they seem at all. There were many points where I was so confused about what was real and what was the unreliability of the narrator. This often made me feel like a mirror of Felicity, a little crazy, and maybe caught daydreaming while I should be paying attention.

I was rather shocked that the author took the path of accepting Felicity's murders as a necessary part of the story/ acceptable. It mainly is due to the fact that Felicity feels this way, but it was shocking nonetheless. The opinion seemed to be that if someone threatens you, kill them. I feel like that is a rather dangerous way to go about talking about murder.

A lesson in vengeance is one of my favorite books of all time and it’s also one of my first mystery book. A Lesson in Vengeance is a mix of emotions the way the story is portrayed is a masterpiece the story has a flow like river water rocky in some parts and then quickly crescendoing into a a vast ocean of opportunity. The kill scheme has a sinister flow you would never suspect who the real sinner really is; this story will leech on to you and never let go. I love it and it has wlw excellent romance, horror and thriller must read.