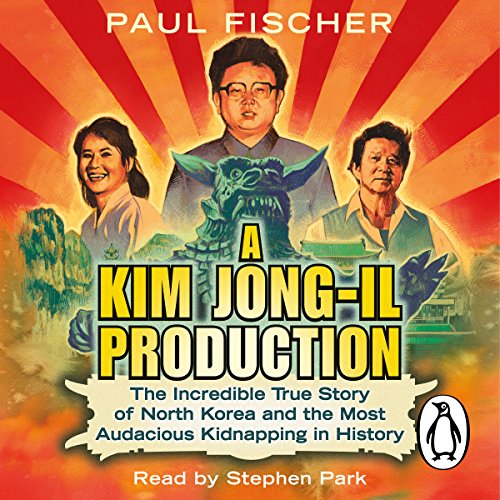 By: Paul Fischer
Narrated by: Stephen Park
Try for $0.00

Before becoming the world's most notorious dictator, Kim Jong-Il ran North Korea's film industry. He directed every film made in the country but knew they were nothing compared to Hollywood. Then he hit on the perfect solution: order the kidnapping of South Korea's most famous actress and her ex-husband, the country's most acclaimed director.

In a jaw-dropping mission, the couple were kidnapped, held hostage, and then 'employed' to make films for the Dear Leader, including a remake of Godzilla. They gained Kim's trust - but could they escape?

What listeners say about A Kim Jong-Il Production

What did you love best about A Kim Jong-Il Production?

The insight into North Korea

What was one of the most memorable moments of A Kim Jong-Il Production?

The dash for freedom in Vienna

Which character – as performed by Stephen Park – was your favorite?

Enhanced by the unobtrusive but expert reading

A peek behind the veil of secrecy in North Korea. Stories of abductions from other countries of people who subsequently turn up there. Specifically a South Korean film producer and his actress wife.
Recommended.

Fascinating, thought provoking and in depth account of one of the strangest kidnappings in history. A good balance between the background of the characters and places, and the first hand accounts of the main players.

Park's narration is strong and easy to listen to.

I recommend for anyone interested in North Korea, film production or intriguing life stories.

Such a great story, hard to believe that it's real but seems to be. Taught me so much about Korean history and what it must be like to have live in the hermit state, well researched and well read, deserves more listeners than it's currently got