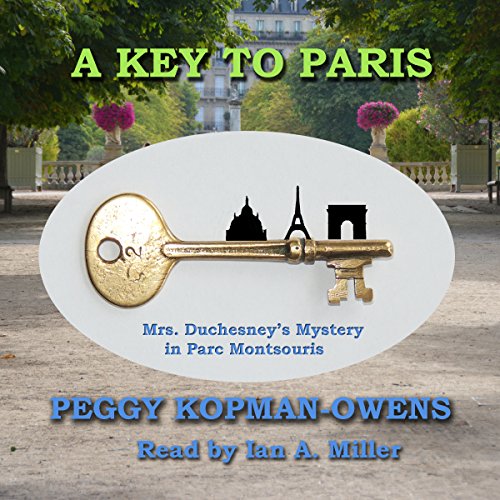 A Key to Paris: Mrs. Duchesney's Mystery in Parc Montsouris

In Paris, there were simply too many beautiful women hiding too many secrets and this case was becoming too personal and too intriguing for Mrs. Duchesney to solve on her own. There was only one name on the engraved invitation - "Louie Arnaud Bertrand" - making it perfectly clear that Mrs. Duchesney was not welcome at Chateau de Robinesque - Roussel. Investigating the "very delicate nature" of this mystery would become her sleuthing partner Louie's first solo assignment. Mrs. Duchesney had to admit Louie was an excellent private detective, but at times like these his weakness for fiery-tempered women always made him act a bit too charming, foolish, and always far too seductive for his own good. It was so curious. Why would a woman who kept the chief inspector of the Paris police on her speed dial prefer the help of a former lover in solving a mystery? Unless, of course, she had something more to hide?

What listeners say about A Key to Paris: Mrs. Duchesney's Mystery in Parc Montsouris

In <strong>A Key to Paris</strong> by Peggy Kopman-Owens, Mrs. Duchesney, an American expatriate, has teamed up with Louie Arnaud Bertrand to form a detective agency in Paris. Louie takes her one Sunday to their favorite restaurant, where they meet a former lover of Louie's named the Contessa Serafina, married to a man 40 years her senior. The contessa asks for Louie's assistance because her latest lover disappeared at the same time as a "little picture." Unknowledgable about art, the contessa can't understand why the painting's disappearance is such a big deal, claiming that she sent the painting to be restored. Then Louie tells her the worth of the painting, over a million euros. Since the contessa and Louie get into a loud shouting match in Italian, Mrs. Duchesney gets out of the restaurant and promptly leaves town without telling anyone.

Using a pseudonym, Mrs. Duchesney applies for a job as housemaid at the Chateau de Robinesque-Roussel, home of the contessa. There she spends three weeks as practically a prisoner in working her fingers to the bone while doing all the snooping she can accomplish in the meantime. Louie, who has always shown disregard for Mrs. Duchesney in letting her know about his whereabouts, suddenly gets a taste of his own poor treatment of his business partner in not knowing anything about her whereabouts. To teach him his lesson and to allow herself fuller access to the chateau, Mrs. Duchesney has called her lifelong best friend, Rudy, to have him cover for her. Each detective works on her or his own for the first time, each getting pieces of the puzzle.

<strong>A Key to Paris</strong> has an interesting mystery, but it was very slow getting to the plot. It spent two hours out of the 12 watching Mrs. Duchesney having a boring Sunday afternoon with Louie, which got a bit tedious. Once the mystery presents itself, it becomes interesting. In contrast with a typical detective novel, it has so many details kept from us readers that we tend to view this as less of a traditional mystery than as a novel with a complex plot that develops over time.

The book is driven especially by its characters, in particular Mrs. Duchesney and Louie. The former uses the title of misses because she thinks it will give her better standing among potential clients. However, as the book says too many times, Mrs. Duchesney is a virgin. Listening to her experiences as a virtual slave in the chateau made me cringe and feel how the estate is run like a Victorian mansion rather than a 21st century one.

Ian A. Miller performs the audio edition of this book. With a pleasant voice, Miller adds a nice touch to the audiobook, using strong voices for the various characters, with an especially believable voice for Louie Bertrand. Occasionally I noticed that certain words seemed to be mispronounced. However, since Miller uses a British accent for the narration and a French one for local characters, it's possible that such words are pronounced differently in those accents.

I found <strong>A Key to Paris</strong> to be of real interest once the initial doldrums of the first Sunday get past. The depictions draw us in to the story and make us connect to the book. The plot does get a little confusing, since it holds back on crucial pieces until the end. I give this book four stars.

<strong>Disclaimer:</strong> I received this book for review purposes, but that in no way affected the content of my review.