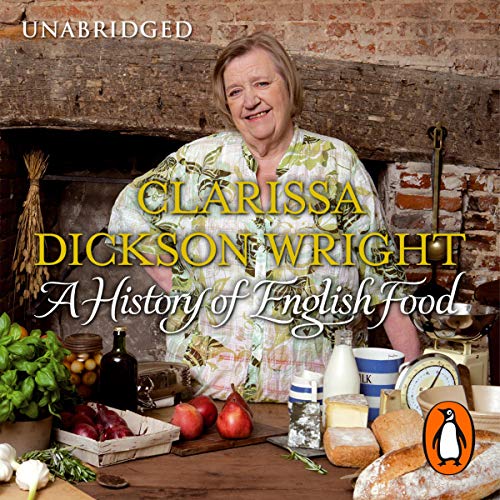 A History of English Food

In this major new history of English food, Clarissa Dickson Wright takes the reader on a journey from the time of the Second Crusade and the feasts of medieval kings to the cuisine - both good and bad - of the present day.

She looks at the shifting influences on the national diet as new ideas and ingredients have arrived, and as immigrant communities have made their contribution to the life of the country. She evokes lost worlds of open fires and ice houses, of constant pickling and preserving, and of manchet loaves and curly-coated pigs. And she tells the stories of the chefs, cookery book writers, gourmets, and gluttons who have shaped public taste, from the salad-loving Catherine of Aragon to the foodies of today.

Above all, she gives a vivid sense of what it was like to sit down to the meals of previous ages, whether an 18th-century labourer's breakfast or a 12-course Victorian banquet or a lunch out during the Second World War. Insightful and entertaining by turns, this is a magnificent tour of nearly 1,000 years of English cuisine, peppered with surprises and seasoned with Clarissa Dickson Wright's characteristic wit.

"one of the most entertaining and fascinating audiobooks that I have ever heard." ( Christina Hardyment, The Times)
"A rambling socio-gastronomic history leavened with humour and eccentricity." ( Sunday Telegraph)
“deliciously rich and moreish” ( Independent on Sunday )
"From the medieval larder stocked with rabbit and eggs to modern cuisine, Clarissa Dickson Wright combines her two great passions of food and history to trace the development of the English diet over the centuries." ( Scottish Sunday Express)
"Surely destined for classic status" ( Independent)
"Make no bones about it, this is an amazing book…. It’s a book that compels you to constantly read aloud tidbits to whoever is unlucky enough to be in the same room." ( BBC Countryfile magazine)

What listeners say about A History of English Food

If you could sum up A History of English Food in three words, what would they be?

Really great to hear the story told by the author herself.

we all know about her obvious passion for cooking, but few know that Clarissa has an equally deep knowledge of history and in particular food and its introduction to the British Isles through history, whose influence on the commonwealth through the 18th and 19th centurys is the resulting fabric of my own culinary heritage.

What about Clarissa Dickson Wright’s performance did you like?

Familiar and warm, she reads in a conversational voice, and its as though you are sitting talking with her over a cup of tea.

What you never suspected about british food, the aristocracy and the poor.

Loved it. Vale Clarissa- thank the universe you penned your great work to leave as your legacy!

As a fan of the two fat ladies and deeply interested in the lost arts of the kitchen I really wanted to give this book a go and I did enjoy it.

Clarissa gives a good run-through of English cuisine starting from Medieval times. It is quite fascinating what she has to say and listening to some of the recipes she has un-earthed make me wish I had bought the printed book so I could try some of them.

There are a few disappointments however. For some reason the tone of her voice isn't as boisterous or excitable as she was in the Two Fat Ladies TV series. She is often quite monotone and only occasionally bursts out with her usual enthusiasm.

There are also a lot of "I supposes" and "In my opinions" so that although she has obviously researched her material there are quite a lot of educated guesses about her subject matter. Not hugely distracting but it happens so often you do start to wonder how much solid facts are in the book.

All in all I did enjoy the book, although I am not sure how many listens I will give it.

Recipe for a great listen

Brits and Aussies may remember Clarissa Dickson Wright as one half of the Two Fat Ladies. I did, and as such couldn't resist buying this book. I wasn't disappointed - with her characteristic wit and wisdom, Dickson Wright makes this gastronomic history of England both entertaining and fascinating. I'm still musing over the origin of the phrase "to eat humble pie", which I had often wondered about but never known who to ask.

Yes, there are a lot of "I suspect"s, a lot of theories which the author really can't substantiate - but at least she acknowledges this, and the unexpected personal musings and personal recollections only add to the flavour of this book, if not to the academic rigour.

Dickson Wright's narration of her own work is of course fantastic - really no one else's voice would do.

An absolute must for anyone interested in history and/or food.

We downloaded this for a long drive to the south of France last summer and it was brilliant. Well written and well read by Clarissa with a real feel for the food and the history and interspersed with anecdotes to link the two. Thoroughly recommended

Clarissa at her best.

What a wonderful book to listen to. Extremely interesting and would highly recommend to you foodies out there.

Would you consider the audio edition of A History of English Food to be better than the print version?

I really enjoyed this book, especially the reading of it. It was fascinating and full of snippets of information I have never heard before. Ms Dickson-Wright hit just the right balance of info and fun without it being boring. I would thoroughly recommend it.

The decision to get Clarissa Dickson Wright to narrate this was a fatal decision. Plodding delivery of mediocre content. Avoid.

This is not a genre I would normally go for, however, I can honestly say I have thoroughly enjoyed this listen. Clarissa gives her straightforward, highly knowledgeable, chronological account of the history of English food. It may sound like a 'dry' topic for a good entertaining listen but it's actually full of interesting little snippets of knowledge. It's something I will listen to over again.

I really enjoyed this and have listened to it several times - there is so much interesting information that you gain something new each time. It gives you a real sense of time and place with intriguing insights into the ways and attitudes of the English through the unusual perspective of food and eating habits.

I like having an author doing their own narrating and Clarissa is very easy to listen to with the same mix of practical common sense and humour that we encounter with her cooking programmes. I hope it prompts a TV series.

Phew! What a knowledge and passion for food

I listened to this wonderful history of food and found myself captivated by Clarissa 's knowledge and wealth of details wrapped up in a passion for all things food and delivered with humour and wit. I will listen to it again and again I know I will find something new in each listen. A great book and a great cook! Fabulous and thank you..

First of all, I love Clarissa Dickson Wright, and the content of the book is fantastic, but I was so close to sending this back. I actually had to force myself to continue listening.
Why? Because Clarissa droned through the entire book in a dull monotone. Chapter One was so bad, I was actually getting annoyed. The contrast between her monotone and the normal voices of those who read excerpts was incredible - they displayed light and vivacity and Clarissa just droned. Not a single change of tone. And just wait till she reads a list....
By Chapter Two she managed to put a tiny hint of enthusiasm into her reading but it was still bad and continued this way throughout the rest of the book.
Whoever was in charge of the recording of this book should be kicked for not telling her to put some life into it.
I actually feel rather resentful because the content is fascinating, yet I had to make myself to listen to it because of her dreadful delivery.

One of the most interesting books I have ever read. I wish Clarissa was still with us so I could write to her! I will definitely listen to it again!

A classic in the making... a pity there is no prospect of a sequel. Try and manage the last supper if ypu dare.

Very informative and interesting, Clarissa is very knowledgeable on her subject. A lovely lady and a cooking icon, enjoyed this very much.

Well read and well researched book. I am about to start this audio book for the second time. Clarissa is generous with her knowledge and has articulated hey thoughts and wisdom well. On my list of people I’d love to meet and dine with. Thank you