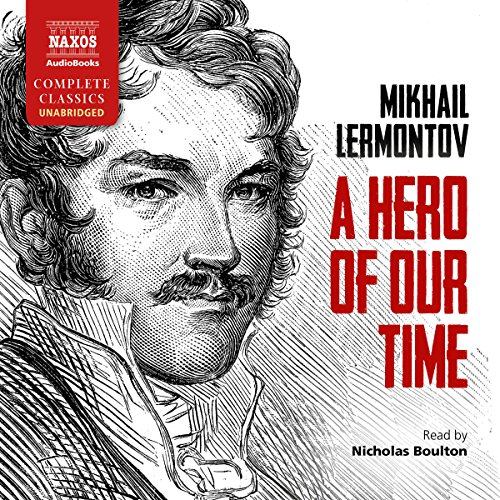 A Hero of Our Time

By: Mikhail Lermontov
Narrated by: Nicholas Boulton
Try for $0.00

Grigori Aleksandrovich Pechorin is an enigma: arrogant, cocky, melancholic, brave, cynic, romantic, loner, socialite, soldier, free soul, and yet, victim of the world, he eludes definition and remains a mystery to those who know him. Just who is he? And what does he hope to achieve?

Evolving from first person to third person, and then into a diary, A Hero of Our Time takes on a variety of forms to interrogate Pechorin's cryptic character and his unusual philosophy, providing breathtaking descriptions of the Caucasus along the way.

The novel has been hailed as an influence on such writers as Dostoyevsky, Tolstoy, and Chekhov, and is a striking take on Lord Byron's "superfluous man"; it harks back to the teaching of Machiavelli, while anticipating the future work of Nietzsche.

Hailed by Vladimir Nabokov as one of the greatest Russian novels, the book has been referenced in novels by Albert Camus and Ian Fleming, and films by Ingmar Bergman.

What listeners say about A Hero of Our Time

It is a pleasant book, the protagonist is a tad tiresome but the story has a good rhythm and, if it is not a page turner, it is far from being boring, still on the whole it is somehow disjointed and ends abruptly as if the author run out of paper.

Eloquent performance of a masterpiece

I wish this was a longer work. What a breathtaking story, with vivid imagery, strong characters, and descriptions of lives that struggled to find meaning.

A Quiet Gem of a Novel!

This novel was one of my set texts for my first-year university reading for Russian literature in translation and I can safely say, I did not expect such a beautiful reading of it. Everything, from Lermontov's seamless transition between describing the Caucasus landscape, to the multi-narration of the Byronic hero, Pechorin is utterly stunning. Nicholas Boulton really brings Lermontov's intended ironies to life too! This is a short, and compelling read which really is unexpected. I really recommend it to anyone who wants a bildungsroman/anti-romance book and wants to be challenged by a realistic representation of human nature at its best and most flawed.