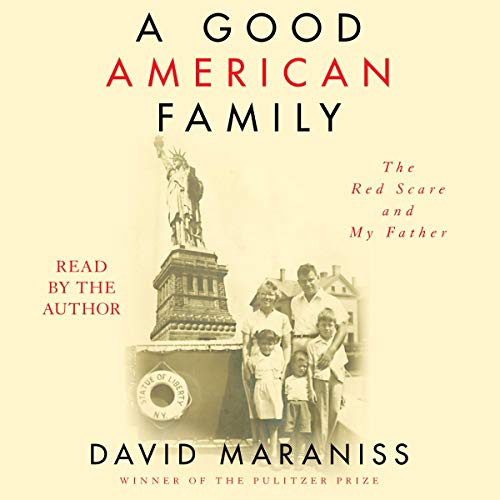 Pulitzer Prize-winning author and “one of our most talented biographers and historians” (The New York Times) David Maraniss delivers a “thoughtful, poignant, and historically valuable story of the Red Scare of the 1950s” (The Wall Street Journal) through the chilling yet affirming story of his family’s ordeal, from blacklisting to vindication.

Elliott Maraniss, David’s father, a WWII veteran who had commanded an all-Black company in the Pacific, was spied on by the FBI, named as a communist by an informant, called before the House Un-American Activities Committee in 1952, fired from his newspaper job, and blacklisted for five years. Yet he never lost faith in America and emerged on the other side with his family and optimism intact.

In a sweeping drama that moves from the Depression and Spanish Civil War to the HUAC hearings and end of the McCarthy era, Maraniss weaves his father’s story through the lives of his inquisitors and defenders as they struggle with the vital 20th-century issues of race, fascism, communism, and First Amendment freedoms. “Remarkably balanced, forthright, and unwavering in its search for the truth” (The New York Times), A Good American Family evokes the political dysfunctions of the 1950s while underscoring what it really means to be an American. It is a “clear-eyed and empathetic” (Publishers Weekly, starred review) tribute from a brilliant writer to his father and the family he protected in dangerous times.

What listeners say about A Good American Family

I was excited to hear that David Maraniss had written a book about his father, Elliott Maraniss, the editor of Madison's Capitol Times newspaper. His dad's story begins with his being hauled in front of the HUAC in the early 1950s, a time that is of great interest to those of us who grew up in Wisconsin but were too young to have a personal experience of the McCarthy era.

But I was hugely disappointed with this book. First of all, David is not a good narrator, and the lack of polish doesn't help his desire to engage us. Secondly, he apparently has little meat about his father's experience and filled early chapters with Maraniss family history and extensive quotes from Arthur Miller's autobiography, Timebends. I quit when the author's overuse of Miller material became irritating.

With several exceptions, it sounded as if every chapter was written by different person. I don’t know what I found is irritating. Otherwise, superb story, superb book

Reflection of my own family.

I stopped halfway thru and read For Whom the Bell Tolls, by Ernest Hemingway, than finished.