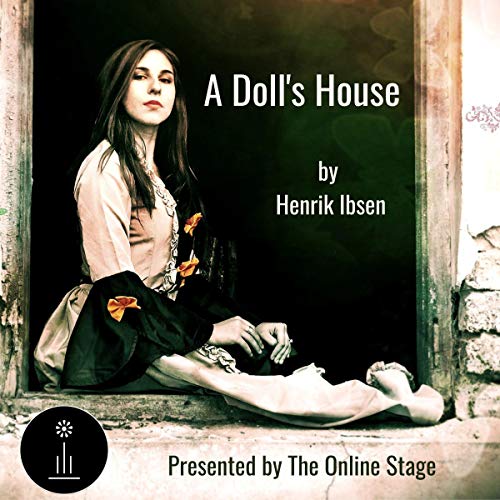 A Doll's House, published in 1879, was the earliest of Ibsen's "social dramas", and the first of his works to attract attention outside of Scandinavia. The central theme of the play is a woman's right to individual self-development, and represents, as humourist Stephen Leacock observed of many Ibsen plays, "a profound problem stated but not solved".

Noel Badrian as the Porter and the Servant

Leanne Yau as the Housemaid

What listeners say about A Doll's House

A Classic Brought to Life

Funny thing about reading a play, as you react to certain characters, it is only through the limited way you, as a reader, interpret their feelings through their words. The joy of listening or seeing a play is how you view the characters through their gestures and/or voices. Once again the players of the Online Stage have taken a classic work, Henrik Ibsen’s, A Doll’s House, and made it come alive.

A Doll’s House in Ibsen’s time was controversial, his questioning of the holy sanctity of marriage and especially the woman’s role as society dictated it.

Amanda Friday as Nora takes us through her transformation brilliantly. From the sing-song, chirpy, happy woman, with a child-like quality in her voice initially, to the woman who literally slams the door in her husband’s face. She plays Nora through a gamut of emotions: happiness and giddiness, to indignation and enlightenment. I have enjoyed several of this talented actress' narrations and this is one of my favorites.

Rob Goll as Torvald is a perfect foil to Friday's Nora.. His authoritative tone, his patronizing manner, his treating Nora as less than an equal are all played perfectly. Centered only on his bank promotion, his beautiful wife and how she can display HIM to his finest, his world crumbles in light of Nora’s abandonment, even his forgiveness is his means of holding Nora tighter.

Friday and Goll’s final scene is heart-rending and emotional, it stayed with this listener.

The rest of the cast is rounded out by excellent performances and once again The Online Stage excelled in the production of this audiobook.