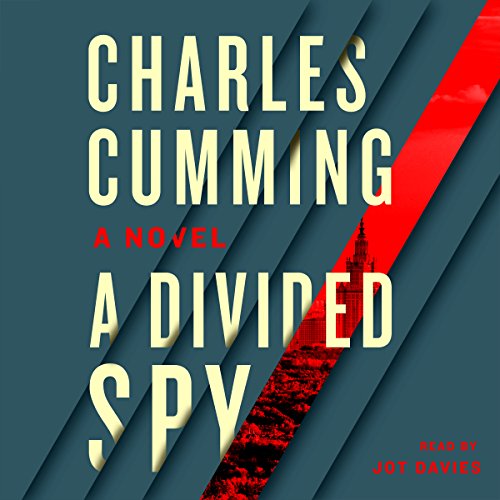 Thomas Kell thought he was done with spying. A former MI6 officer, he devoted his life to the Service, but it has left him with nothing but grief and a simmering anger against the Kremlin.

Then Kell is offered an unexpected chance at revenge. Taking the law into his own hands, he embarks on a mission to recruit a top Russian spy who is in possession of a terrifying secret. As Kell tracks his man from Moscow to London, he finds himself in a high stakes game of cat and mouse in which it becomes increasingly difficult to know who is playing whom.

As the mission reaches boiling point, the threat of a catastrophic terrorist attack looms over Britain. Kell is faced with an impossible choice. Loyalty to MI6 - or to his own conscience?

What listeners say about A Divided Spy

Best of the bunch

This book, the third in the series, was better than the others, better than the Trinity Six by this author and the best spy book I've read for awhile. It's a genre I particularly like, so I'm always glad to score a hit with one, which gets harder and harder the more I read. I have my huge favourites, such as Daniel Silva and John Le Carre, but this book I enjoyed just as much as both of them. There was little actual violence, but lots of intrigue, which is far more interesting to me and the twists and turns seemed mostly plausible. The story line connects with current events and issues, and the characters are very clearly drawn. The narration was first rate. The book stands alone as the explains anything you need to know from the first two books of the series, so you can try this first if he's an author new to you. I didn't find the events of the first two books stayed in my mind all that well anyway, as to me they were both just 'good enough', not great.

Didn't realize it was a sequel.

I found this book difficult to finish. Too many repeated references to a previous book. Predictable plot.

An easy read. I wanted more time with the characters but enjoyed the fast pace.

Very Predictable , narrator sometimes hard to hear and decipher what the author intent was

One of Cumming's stronger books I thought. Not up there with The Spanish Game but the best Kell novel I thought. Evocative and detailed.

The narration was really excellent - there was a wide range of characters to portray and he does a great job - especially Minasian - talk about a character coming to life!

Five stars all around, in my estimation: I felt as though I knew the protagonist, Thomas Kell. Expertly narrated, the several characters and their origins were so thorough and developed that I was amazed at the author's brilliance.

Weak in all respects

Farfetched, trite, cliched, and ridden with overused writing class techniques. Made it just over half way before I had to give up. Complete waste of my time.

I could not follow the book. I would think the narrator was tell me something delightful was happening by the tone of his voice, only to find out it was a bad thing. Could not get invested in characters. Lasted only a fe chapters.