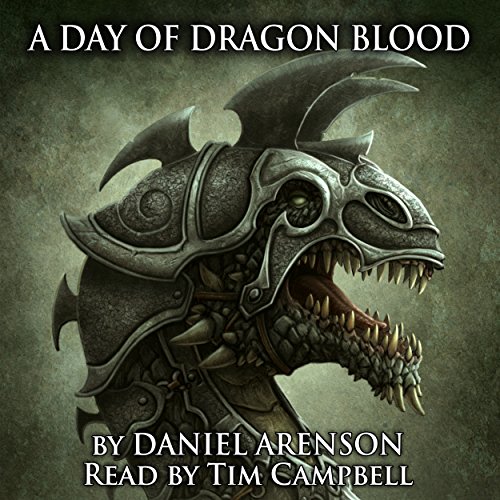 A Day of Dragon Blood

Dragonlore, the fantasy trilogy beginning with A Dawn of Dragonfire, continues with a new epic tale.

Requiem, an ancient land whose people can become dragons, lies smoldering. After burning Requiem's halls and forests, the cruel Queen Solina retreats into her desert kingdom; there she plans her second assault. Among the dunes, Solina wakes an ancient, buried evil: a horde to slaughter every last dragon.

The wyverns rise from the desert, beasts of iron scales, leathern wings, and claws like swords. Myriads swarm. From their maws spews acid to eat through flesh, stone, and steel. Flying upon the Wyvern King, her sword and banner raised, Solina leads her host into Requiem.

Requiem's dragons are still healing; their wounds are fresh, their hearts haunted. How can they defeat the wyverns, creatures as cruel as the desert that bred them?

What listeners say about A Day of Dragon Blood

I am about to start the 3rd book of this story line. I have thoroughly enjoy both the author's imagination and the narrator as he brings the character to life. Very well done. However; there is one aggravating problem (in my opinion) that I must address. "When did the word grimace become too words?" Was distracted every time the narration said " grim ace!" Makes a very good narrator sound pompous or pretentious. Since both of these words can stand alone, when combined they should be pronounced correctly. Suggest you pronounce the compound word as intended or find another verb!