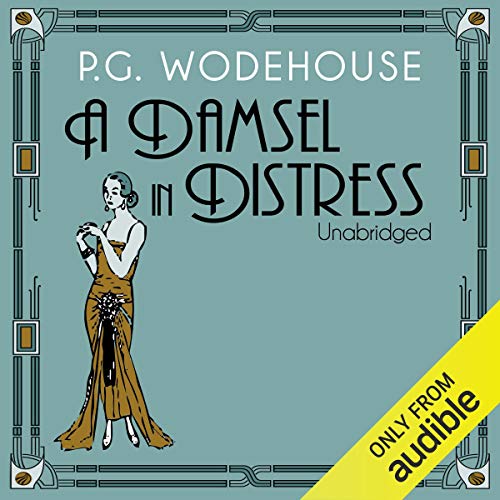 A Damsel in Distress

When Maud Marsh flings herself into George Bevan's cab in Piccadilly, he starts believing in damsels in distress. George traces his mysterious travelling companion to Belpher Castle, home of Lord Marshmoreton, where things become severely muddled. Maud's aunt, Lady Caroline Byng, wants Maud to marry Reddie, her stepson. Maud, meanwhile, is known to be in love with an unknown American she met in Wales. So when George turns up speaking American, a nasty case of mistaken identity breaks out. In fact the scene is set for the perfect Wodehouse comedy of errors.
©2014 P.G. Wodehouse (P)2014 Audible, Inc.
Literary Fiction Humorous
Show more Show less

What listeners say about A Damsel in Distress

Solid but probably for fans only

Written in 1919, A Damsel in Distress has all the elements of a classic Wodehouse farce: a titled aristocrat or two, an imperious butler, an American interloper and, of course, a charming heroine being prevented from marrying the hero by a bossy, interfering aunt who thinks about nothing but class and money.

Jonathan Cecil is a solid reader (not my personal favourite, but I think I'm in the minority there), and this is definitely worth a listen, but if you're new to Wodehouse, this probably isn't the audiobook to start with.

If you like his other books, you'll love this one

I've listen to quite a few of his books now and I think this is one of his best. Very funny and a great story.

Normally I wouldn't choose a book like this, but I wanted something different. This book turned out to be a delight. It was a light hearted comedy of errors. It was a fun listen.

One of the characters reminded me of Hugh Laurie's character on Black Adder. See if you can guess which one...

Yes, not quite as many 'laugh out loud' moments, but still enjoyable. Pleasant place to have your mind for a few hours of light-heartedness.

This is one of my favorite Whodehouse and Jonathan Cecil is the best. You won't be disappointed.

Any Wodehouse is Better than No Wodehouse

Jonathan Cecil enlivens one of P.G. Wodehouse's minor novelettes. If you're unfamiliar with Wodehouse, start with the Jeeves/Wooster stories, not this one. If you're a Wodehouse addict looking for a temporary escape from this crazy world, "A Damsel in Distress" will do.

Many people know little more than the Jeeves and Wooster stories by P. G. Wodehouse.

This is as good a place as any to start exploring his other stories.

It has the same basic plotlines that are so well loved and the same cast of colourful and eccentric characters.

Buy it and you won't be disappointed.

Would you listen to A Damsel in Distress again? Why?

I am a Wodehouse fan and there are very few of his stores that haven't thoroughly enjoyed. Whilst this may not be one of his best it's still very, very good. The typical thread of circumstances, characters' single-mindedness and downright tomfoolery lead the novel through catastrophe, plotting and delight. The course of true love, in the Wodehouse world, never runs smoothly.

Jonathan Cecil is one of the best performers of Wodehouse novels. He managers to really engage the listener and his ability to conjure up the characters personalities vocally is astounding.

Brilliant narration by Jonathan Cecil, this is my first Audible PG Wodehouse and I can't wait to hear more.

A treat to rival any Jeeves book

Where does A Damsel in Distress rank among all the audiobooks you’ve listened to so far?

I devoured all the Jeeves books (two or three times each) but I hadn't thought to explore other P G Wodehouse books. How silly of me and what a lot of lovely catching up I have to do. This was my first venture into non-Jeeves stories and it was delightful; a great start for anyone fearful of leaving behind their dear friend Bertie and venturing into unfamiliar waters. The characters in a Damsel in Distress are familiar in their Wodehouse-ness and the story is immediately appealing. And good old Jonathan Cecil as narrator; no one reads Wodehouse better than Cecil.