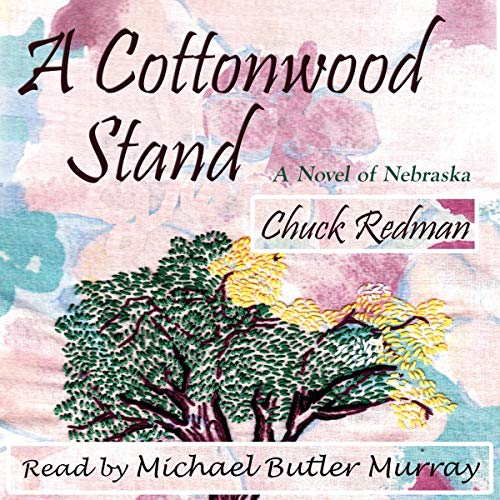 By: Chuck Redman
Narrated by: Michael Butler Murray
Try for $0.00

Nebraska: not just a place on a map. It has a heart, and it has a voice. It has a then. It has a now.

Several centuries ago, a young Sioux woman called Lark rebels against her people's traditions and crosses the plains to save her adopted sister from a bad marriage proposal and return the girl to the Pawnee village from which she was abducted in childhood. At the end of her journey, Lark finds herself the center of a mysterious Pawnee ritual that undermines her plan as well as her confidence.

In this century, Janet Hinderson runs a small-town newspaper and crusades against a proposed meatpacking plant that will destroy the fabric of the town, along with its landmark stand of cottonwoods. But Janet's hard and soft sides must grapple when the meat company's general counsel comes to town and reveals some cryptic interest in her.

These are not two stories. They are connected, told and wound into one - each exploring social issues and themes that are vital and timeless.

What listeners say about A Cottonwood Stand

I could not get past the performance. It was as if Mr. Murray was trying too hard. Nebraskans don't talk like that I'm not talking about the author's word choice. I'm mean the way Mr. Murray did it. He makes rural Nebraska sound backward. I will have to listen to Alexa read this so as to not be distracted by the reading.

Great Way To Connect The Present To The Past

When I first started listening to this story, it reminded me of the old time radio shows or more current would be the Garrison Keelor show. Mr. Murray does a great job with all the characters. The way he's able to change his voice helps to bring them to life - whether it be male or female. I don't know the process of how a narrator is chosen but they made the perfect choice here. I felt like I was sitting on a porch listening to the narrator telling me a story, or stories, of the people that live in small town Nebraska. There's nothing bad that I can say about his performance.

Mr. Redman does a great job in painting a picture where a young woman takes a stand for what she believes in. If it weren't for her, I had to wonder what this town would be like if she hadn't taken that stand. I've never visited any states that are west of the Mississippi. Mr. Redman may just have given me the incentive to change that. But it's not the big cities that I want to visit but the smaller communities where things seem to go slower, people all know each other, and maybe even one that has some history to it.

I can't say that I'm prejudiced but Mr. Redman reminds me how little I read the work of male authors. I'm all for romance but I will once in a while jump out of my comfort zone to check out some of the other genres. If not for being a part of a book tour, I may never have discovered this book. But Mr. Murray spoiled me because after hearing him bring Mr. Redman's book to life I don't know that I would read the book because I don't think I would do as great a job.

If I had to say one bad thing it would be the parts where we're going along in the present but then it changes to the past is when I have an issue. It took me a while to realize that something has changed but when I hear Lark speak is when the light bulb goes on. I think to myself; "they don't speak like that now" is when you realize that you've gone back in time. And since I don't have the book it's hard to tell you if the experience would be different or not. To end on a happy note, I can see myself listening to this book more than once - and maybe even twice.

I voluntarily reviewed an Audiobook copy of this book.

Chuck Redman has written a winner with his novel debut, A Cottonwood Stand: A Novel of Nebraska . I have to admit I was not sure how I would like it at first, but was quickly quite entertained with the book throughout. I had the opportunity to receive the audible version and listened while I cooked my family’s dinner every night. I found myself wanting to take my time and keep listening. The narrator, Michael Butler Murray, did a fantastic job with his performance. He perfectly executes the scenes the way author intended to be. I hope to find more audiobooks that he has narrated in the future.
A Cottonwood Stand: A Novel of Nebraska is one of my favorite books I have read this year so far. Mr Redman’s writing and Mr Murray’s voice are a perfect combination. I highly recommend this book for all readers. It is not one to be missed.
I received this audio version from the publisher. This review is 100% my own honest opinion.