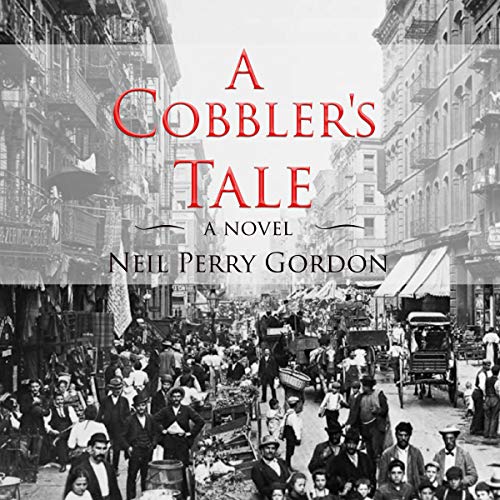 By: Neil Perry Gordon
Narrated by: Michael Fischbein
Try for $0.00

A Cobbler’s Tale is an adventure story about Pincus Potasznik, a second-generation Jewish cobbler, born in a small shtetl in the province of Galicia, part of the former Austro-Hungarian Empire.

In 1910, at the historic height of the massive Eastern European immigration wave to the New World, Pincus decides to leave behind his pregnant wife, and three small children, in order to seek a new life for his family in the burgeoning Lower East Side of Manhattan. On his traumatic voyage across the Atlantic Ocean on the SS Amerika steamship, Pincus meets Jakob Adler, a young man running from an accidental murder of a notorious crime boss in Warsaw.

The story also explores the challenges of pregnant Clara Potasznik as she does her best to protect her family, while the bloodiest battles of World War I explode within miles of her family home, a small village called Krzywcza. Moshe, the young son of Pincus and Clara Potasznik, discovers his divine ability to foretell dire events, and to offer real comfort those in pain, taking the reader into the wisdom and mystery surrounding the ancient Jewish mysticism, known as Kabbalah.

A Cobbler’s Tale is a story of a family’s survival against tremendous odds.

What listeners say about A Cobbler's Tale

"There is only one way to change the world..."

"There is only one way to change the world, by changing ourselves." Kabbalah

This story captured my imagination. It tells the story of two Jews fleeing from Poland before WWI and arriving in America. Pincus Potasznik leaves his pregnant wife Clara behind with their three small children. Jakob Adler is running from a crime he committed when working for the Jewish Mob also in Poland. They meet on the ship when Jakob helps Pincus survive his voyage by getting him fresh air and good food.
I enjoyed the give and take between these two very different men. Yet, they are both very similar deep down. Jakob falls hard for a beautiful Irish singer who happens to be involved with his new mob boss. Pincus works hard in America to help his people find it easier to adjust in America through a social club he helps to form.
Meanwhile back in the old country, Clara is finding it increasingly difficult to live as a Jew in Poland. She has to make very hard choices to keep her family going. Pincus continues to send them money, but doesn’t return to get them. When WWI starts, it may be too late.
This is an adventure story. It is also a very human story about wonderful characters being involved in horrific events.
The author sent me an audible gift of this book.
I highly recommend this story for anyone that enjoys historical novels with lots of adventure.

You should know that this story is a family legend of the generation that moved the family from Poland to the US. The writing is simple and the hero’s and villains are sharply defined. It reads like young adult fiction.

Fascinating story with twists and turns

I thoroughly enjoyed listening to this story. The story is terrific and the narrator brings the characters to life. It is especially meaningful today as we are faced with national and world issues. Remembering the sacrifices, tragedies and realities of life only a couple generations back should put in perspective what a historically positive time we live.

Coupling the telling of life in early 20th century America and Europe with some unexpected twists and turns makes for a very enjoyable book. Remembering and learning while entertained.

Enjoyable...realistic ficticious storyline. The narrator was a great match to the story. Slow paced so don't be impatient bevause it fits the story. Character portrayal was believable. My favorite scene is where Pinkus sobs at the dinner table when he makes it back to his family.

I listened to this book as an audiobook with Audible. I had only listened to a few audiobooks prior to this one, and I had never used Audible, but I found that it’s so easy and enjoyable to listen to a book with the Audible app. Compared to the other books that I listened to, A Cobbler’s Tale is great as an audiobook. The chapters are short, it’s told for the most part in a linear fashion, and something exciting is always happening, so it’s easy to listen, stop and then start right back in with the plot. The narrator of the book was also easy to listen to and he captured the accents of the various characters as well as their personalities.

The cover of the book gives a vivid view of one of the main settings of the book, the lower East side in New York City, in the early 1900’s. This street, crowded with people and pushcarts is where Pincus Potasznik, a second-generation Jewish cobbler, born in a small shtetl in the province of Galicia, part of the former Austro-Hungarian Empire finds himself. About 500,000 Jewish people lived in this section of New York, immigrants from eastern Europe.

The book details Pincus’ reasons for coming to America, his perilous ship journey to New York, his efforts to establish himself as a cobbler in the lower East side and his journey back to his home to bring his wife and children to America. But, so much more happens and it’s all thrilling and entertaining. The author is a born storyteller and readers will be captivated by all the colorful characters and the dangers, schemes and plots that abound. We also get a good look at the Jewish culture of the times.

Many thanks to the author for the audiobook. This is my honest review.