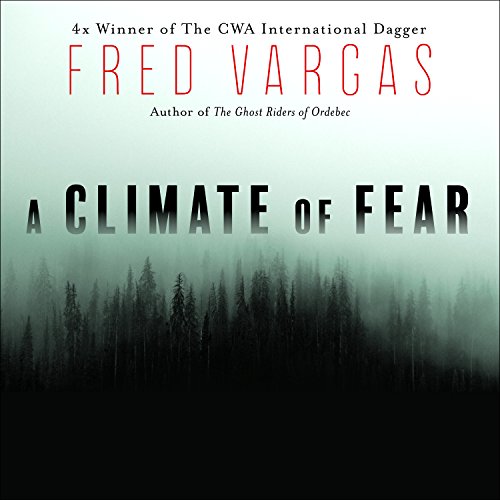 A Climate of Fear

By: Fred Vargas,Sian Reynolds
Narrated by: Chris MacDonnell
Try for $0.00

A woman is found murdered in her bathtub, and the murder has been made to look like a suicide. But a strange symbol found at the crime scene leads the local police to call Commissaire Adamsberg and his team. When the symbol is found near the body of a second disguised suicide, a pattern begins to emerge: Both victims were part of a disastrous expedition to Iceland over 10 years ago where a group of tourists found themselves trapped on a deserted island for two weeks, surrounded by a thick, impenetrable fog rumored to be summoned by an ancient local demon. Two of them didn't make it back alive. But how are the deaths linked to the secretive Association for the Study of the Writings of Maximilien Robespierre? And what does the mysterious symbol signify?

What listeners say about A Climate of Fear

Give us more Fred Vargas

Once more Ms. Vargas takes the crime novel / police procedural to new heights. Educating us with history adds to the excellence of the fiction.

She’s not well known in US but she should be. Intricate plot, interesting characters and a sly humor. I enjoyed every minute.

I love all the quirky characters but it did go on and ON about the Robespierre aspect too much too confusing but as usual never saw the end coming. I love her animals the stallion and especially mark the wild boar. Translate more if her books !

Sometimes I have trouble following the jumps in Adamsberg's thinking, but overall super enjoyable. Fascinating look into French police life.

It has been a few years since reading an Adamberg Fred Vargas and I loved hearing this audio book.

Overall I liked this book, mainly because the characters were likable. That's what pushed me through the parts that dragged due to the minutiae of every aspect of the investigation. After going through an interview of one suspect, you'd again go through it when the investigator reported back to the squad. Sometimes it was all very tedious.

The plot itself was also very convoluted. It was hard to keep up at times with all the different theories. It's true that I didn't see the ending coming, but it fell a bit flat regardless.

My main "complaint" pertains to the narration. The narrator did an excellent job with telling the tale and used different accents and voices for the characters, BUT... this story takes place in Paris - all the different accents were British. It was very disorientating to reconcile voice and place. There was even a Spaniard as a character and ironically his accent sounded French. It was all very surreal.

The bottom line, I suppose, is that it was not an unpleasant way to pass the time, but I can't really recommend it with much enthusiasm.

it was fantastic a must read, I would fed recommend so good . word word