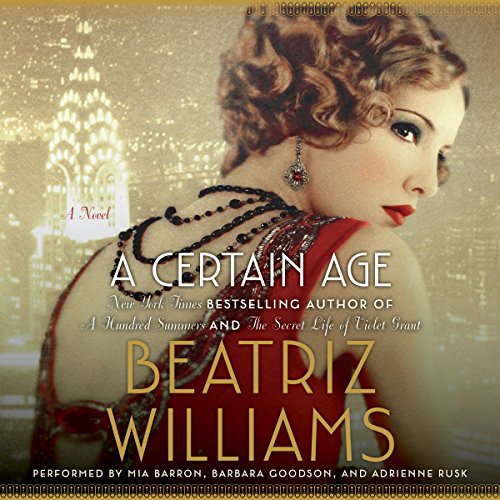 The best-selling author of A Hundred Summers brings the Roaring '20s brilliantly to life in this enchanting and compulsively listenable tale of intrigue, romance, and scandal in New York society, brimming with lush atmosphere, striking characters, and irresistible charm.

As the freedom of the Jazz Age transforms New York City, the iridescent Mrs. Theresa Marshall of Fifth Avenue and Southampton, Long Island, has done the unthinkable: She's fallen in love with her young paramour, Captain Octavian Rofrano, a handsome aviator and hero of the Great War. An intense and deeply honorable man, Octavian is devoted to the beautiful socialite of a certain age and wants to marry her. While times are changing and she does adore the Boy, divorce for a woman of Theresa's wealth and social standing is out of the question, and there is no need; she has an understanding with Sylvo, her generous and well-respected philanderer husband.

But their relationship subtly shifts when her bachelor brother, Ox, decides to tie the knot with the sweet younger daughter of a newly wealthy inventor. Engaging a longstanding family tradition, Theresa enlists the Boy to act as her brother's cavalier, presenting the family's diamond rose ring to Ox's intended, Miss Sophie Fortescue - and to check in to the background of the little-known Fortescue family. When Octavian meets Sophie, he falls under the spell of the pretty ingénue, even as he uncovers a shocking family secret. As the love triangle of Theresa, Octavian, and Sophie progresses, it transforms into a saga of divided loyalties, dangerous revelations, and surprising twists that will lead to a shocking transgression...and eventually force Theresa to make a bittersweet choice.

Full of the glamour, wit, and delicious twists that are the hallmarks of Beatriz Williams' fiction, and alternating between Sophie's spirited voice and Theresa's vibrant timbre, A Certain Age is a beguiling reinterpretation of Richard Strauss' comic opera Der Rosenkavalier, set against the sweeping decadence of Gatsby's New York.

What listeners say about A Certain Age

What would have made A Certain Age better?

Anything. I LOVE Ms. Williams, but I am unsure where this book came from. It is far from her normal work and honestly I can't even believe she wrote it. Her other books are filled with smart whit, can be laugh out loud funny and sad all at the same time, and her signature shock and awe the whole way through leading up to a great end, is what I love most about her. This book was none of that. Super anticlimactic, boring and the girl's voice who read for Sophie was TERRIBLE!

Would you ever listen to anything by Beatriz Williams again?

I hope to if she gets back into her rhythm.

The woman who read Tereasa was fine, and same with the newspaper woman, but Sophie's narrator tried to be Daisy-esque (from Gatsby) I am guessing and it did not work out well. Her blasé tone made it to where you couldn't detect any emotion in her words. This in turn, evoked no emotion for me and made me extremely bored and unable to get interested in the novel.

I like the Liane Moriarty "Big Little Lies" type-feel of the ongoing investigation starting the book off and then consisting throughout the book, but unlike Moriarty, Williams did not pull off the anticipation or excitement. The idea needed to be more thought out instead it seemed sloppy.

Let me again say I am a HUGE fan of the Schuyler sisters books, and A Hundred Summers. I did not like The Forgotten Room at all. I will try Ms. Williams one more time, before I completely give up on her.

What made the experience of listening to A Certain Age the most enjoyable?

The storyline was great I love Beatriz Williams books and I was so excited to see references to characters from her past novels. However, the narrator for Sophie's perspective was HORRIBLE she sounded like a robot and made listening to the book almost unbearable.

Usually I am glued to my iPod when i have a new Beatriz Williams audio book but this one I found myself turning off after only a few minutes the narrator for Sophie was so bad.

Not the best performance...

I must say, the women who voiced Sophie and Mrs. Marshall sounded like nails on chalkboard. I sped up the playback, which helped cut out the respective whine and harshness of both voices. It was an interesting story, but doesn't compare to the other novels by Ms. Williams.

Sophie’s story was excellent but I groaned every single time Teresa came back..

Teresa’s side of the story was like nails on a chalkboard to listen to, she was just hard to like, and I felt like I was going to tear my hair out if I heard her refer to her younger boyfriend as “the boy” one more time after the first 20 thousand. It’s worth it to listen to Sophie’s story but Teresa was the worst part of the book for sure, not to mention her dumb as a rock brother who had his own annoying traits like constantly calling her “sisrrr” 🙄

An absolute joy to listen to!

I really enjoy the works of Beatriz Williams, especially during this quarantine and pandemic of 2020. With this book, I was able to travel back to 1920 and live vicariously through those who had survived the Spanish Flu pandemic and were enjoying everything the roaring twenties had to offer!

Love all of her books,and any of them would make a great movie.The history from 1920- 60's is fascinating !

This is the first time ive ever listened to a book. It's a game changer. i joined a book club and havent finished a book yet due to my work schedule. This is the best way to get the book done.
This book was an awesome choice.

Tough to get into

This is the second book that I've read by the author. It was okay. However, I feel that the way her characters converse is just so awkward and stilted. And I also feel like the plot is disjointed. I had the same feeling listening to "The Summer Wives". The overall story was good, but listening to it was difficult. The narration was not to blame.

Unfortunately this was my least favorite Beatriz Williams book. It’s alright, but not her best.

The narrator is really bad I thought. It sneaks up on you but all of a sudden you realize. The story is a little boring and slow too. I unfortunately disliked it enough to give up listening. Just wasn’t worth it.